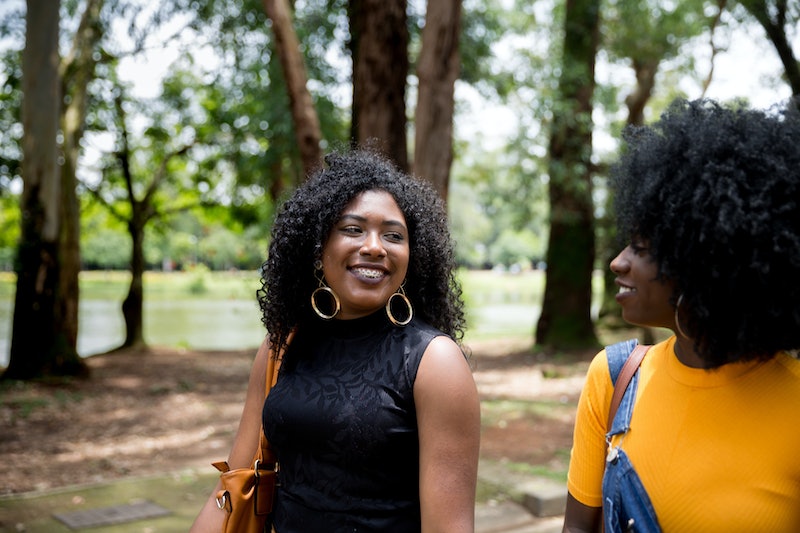 Some of us, at some point, have probably been told to keep all the details of our sex lives to ourselves. While it's completely understandable that not everyone is comfortable sharing private business (and that's OK!), for many women, it's helpful — and something we actually do often. In fact, a 2014 survey by Match actually found that 57 percent of single women talk about their sex lives with their friends. So if you think you and your friends are the only ones who like to share, it actually happens more often than you think.

"It is absolutely normal to talk about your sex life with your best friend," Rena McDaniel, M.Ed., clinical sexologist, tells Bustle. "There are still some cultural taboos about being open with friends about your sex life, particularly for women. But talking about sex to your friends is a great way to de-stigmatize a normal and healthy part of life and shift the conversation about sex from dirty to empowering."

McDaniel definitely knows a thing or two about having open conversations about sex with women. She recently worked with Lifestyles' #EqualPlay campaign, which aimed to rethink the way condom companies included women in conversations of sexual health. "I learned that, if you put a group of women and non-binary folks in a room and ask them to talk about sex, they will," McDaniel says. "They will keep talking for eight hours because there is that much to say about a topic we too often ignore."

The Danger Behind Not Talking About Sex With Friends

A recent survey conducted by LifeStyles found that 63 percent of people still don't believe it's acceptable for women to be as sexually active as men, which is ridiculous, sexist, and problematic. But it's also an example of why avoiding conversations about sex is such a problem. There's still that unfortunate stigma that says "good girls don't talk about sex," McDaniel says.

"This is a dangerous idea that breeds misinformation and effectively shuts down a critical piece of the conversation about healthy sexuality," she says. Because when women start talking more openly about sex, important discussions related to consent, pleasure, and equality come along with it. "This is powerful and subversive to the dominant narrative about sex that centers around men and is a large reason that I believe women's voices in the conversation about sex and sexuality have been shut down for so long."

"When we avoid certain topics related to sex and sexuality because they feel hard or bring up shame, we do each other a disservice. Instead of healing, we dive deeper into shame and hiding."

Clearly, if you're comfortable with it, talking more openly about your sex life with your friends is important, and can be helpful But are there lines you shouldn't you cross? Should even the best of friends have some boundaries when it comes to talking about their sex lives? While McDaniel recognizes certain topics are hard (i.e. violations of consent, regrets, choices we've made that we aren't too proud of, etc.), she firmly believes that we should still be discussing those issues. "When we avoid certain topics related to sex and sexuality because they feel hard or bring up shame, we do each other a disservice," she says. "Instead of healing, we dive deeper into shame and hiding and that doesn't serve anyone."

The #1 Benefit To Sharing Your Sex Life With Your BFF

Ever hear of the orgasm gap? Well, research has found women don't orgasm nearly as much as men do. Keeping issues around sex to yourself doesn't help that problem, but becoming more comfortable with talking to your friend about sex may even make your sex life better. Or at least, how you think of it.

"When we talk about sex with our friends, we are normalizing experiencing pleasure with our own bodies," McDaniel says. "As a sex therapist, I hear stories from so many women who think they are broken because 'sex isn't working.' But when we share our experiences with each other (the really pleasurable moments as well as the painful ones), we can learn from each other, share resources, and collectively learn to have even better and more pleasurable sex."

So is talking about your sex life with your BFF cool? Absolutely.

More like this
5 Signs You Have A Toxic Relationship With Yourself
By Lexi Inks
Here's Why Trash-Talking Your Ex Can Actually Help You Move On
By Genevieve Wheeler
My Partner Wants Me To Wear A Diaper During Sex. Help!
By Sophia Benoit
TikTok's "Triangle Method" Technique Is The Key To Better Flirting
By Carolyn Steber
Get Even More From Bustle — Sign Up For The Newsletter
From hair trends to relationship advice, our daily newsletter has everything you need to sound like a person who’s on TikTok, even if you aren’t.