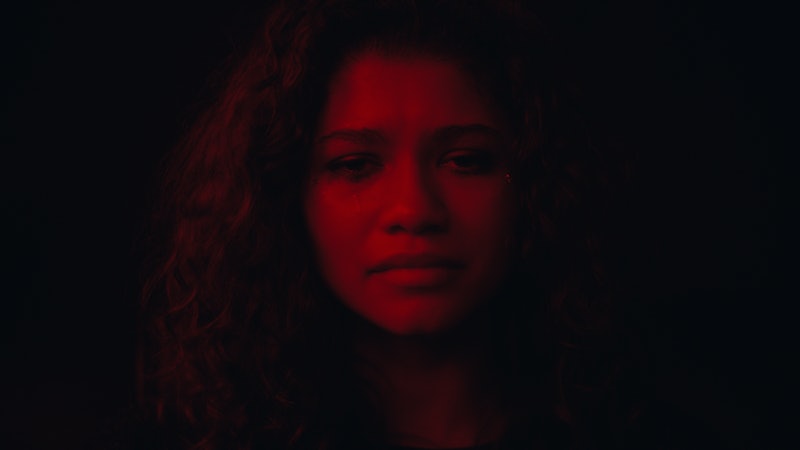 "I was once happy, content," Rue explains in the show's opening moments. "Then one day, for reasons beyond my control, I was repeatedly crushed over and over by the cruel cervix of my mother Leslie. I put up a good fight, but I lost. For the first time, but not the last."

Rue was born three days after 9/11, an event she links to her own beginnings of unhappiness. Her parents watched the news until their feelings "gave way to grief and numbness," something that Rue seems to think may have seeped into her. We're told Rue had a middle class childhood in an American suburb — that she has loving parents, a nice home, clean clothes, and plenty of food. To any bystander, her life should be perfect, and yet she's struggled with anxiety and unhappiness for almost the entirety of her life.

"It's not like I was physically abused, or had a shortage of clean water. Or was molested by a family member. So explain this sh*t to me," Rue says, frustrated. At a young age, she was diagnosed with OCD, ADD, general anxiety disorder, and possible bipolar disorder. (If this sounds entirely unbelievable, it's not; research suggests that these disorders tend to overlap in certain patients.)

She was given a cocktail of daily pills to take, but after struggling through her middle school years amid a world that "moved fast" with a brain that "moved slow," she decided to stop taking them entirely and instead pop her father's Xanax. Her drug misuse escalated from there; when we meet her, she's being driven home after an overdose and a subsequent summer in rehab. The drugs made Rue feel better, but they also destroyed her.

That the main character uses drugs not because she's trying to be edgy but because she's struggling with her mental health makes Euphoria particularly relevant to Gen Z. A 2018 report by the Pew Research Center surveyed 920 kids ages 13 to 17 and found that 70% of them see anxiety and depression as the most pressing issue facing their peers today, easily beating out age-old issues such as bullying, teen pregnancy, and alcohol use.

And while Rue's belief that 9/11 planted the seeds for her unhappiness may feel glib, studies have suggested that world news (and politicians' inaction toward the issues it covers) is exacerbating depression rates among Gen Zers. A 2018 "Stress in America" study done by the American Psychological Association found that teens are significantly more stressed about issues such as the rise in mass shootings, climate change, immigration deportation, income inequality, and sexual assault than their adult counterparts. The study also found that Gen Z was the generation least likely to describe their mental health as "good."

That Rue mentions that she has depression despite growing up in a loving, comfortably middle class home is also important, because it pushes back on the misconception that all depression stems from past trauma. Depression is a disorder that still has no single defined cause, and the reasons for why people suffer are varied and complex. Rue's struggle to be happy despite personally having a "good life" provides a realistic look at what many teens are grappling with today.

Of course, issues like drug misuse and depression should be portrayed delicately ⁠— particularly when targeted to an impressionable young audience. But this was something Euphoria creator Sam Levinson was intimately aware of, mostly because of his own experiences. "I was a drug addict for many years, and I've been clean for many years now," he told Entertainment Weekly in May. "I was trying to capture the heightened sense of emotion when you're young and how relationships feel. The world feels like it's just constantly bearing down on you. That anxiety, and those sort of mood swings, I think, are inherent to being young — but even more so when you struggle with anxiety and depression and addiction."

At the show's premiere at the ATX Television Festival, Levinson said they were mindful of not glamorizing Rue's drug use, but also wanted to be realistic. "If we're pulling our punches and we're not showing the relief that drugs can bring, it starts to lose its impact," Levinson said. "Because drugs can — drugs are not the solution, but they can feel like it at times, and that's what makes them so destructive."

In the pilot episode, it feels like the portrayal veers a little too close to glamorization for comfort — Rue stumbles around a party in a glittery dress and make-up, pink and purple lights forming a halo around her as she puffs a billow of smoke into the air. It's not until later episodes that viewers will see more of the fallout — Rue lying in a puddle of her own vomit, and struggling to move through everyday life without drugs to quiet her mind.

Perhaps it's irresponsible to not put that more upfront, but Zendaya's incredibly powerful acting smooths over what could've come off as an endorsement for drug misuse. She's able to distill Rue's exhaustion and pain into a vacant, hollowed out gaze, and we understand immediately that even when the character is smiling, every day, every minute is a struggle for her. Sadly, many teens watching will be able to relate — but that's sort of the point.

More like this
'The Queen’s Gambit' Season 2 Tweet Wasn’t From Anya Taylor-Joy
By Mary Kate McGrath, Jack Irvin and Grace Wehniainen
Netflix Shut Down 'Bridgerton' S3 Rumours About A “Very Dark” Storyline
By Bustle
Everything To Know About 'And Just Like That...' Season 2
By Jack Irvin and Grace Wehniainen
'The Last Of Us' Episode Schedule Competes With The Super Bowl & Oscars
By Brad Witter
Get Even More From Bustle — Sign Up For The Newsletter
From hair trends to relationship advice, our daily newsletter has everything you need to sound like a person who’s on TikTok, even if you aren’t.