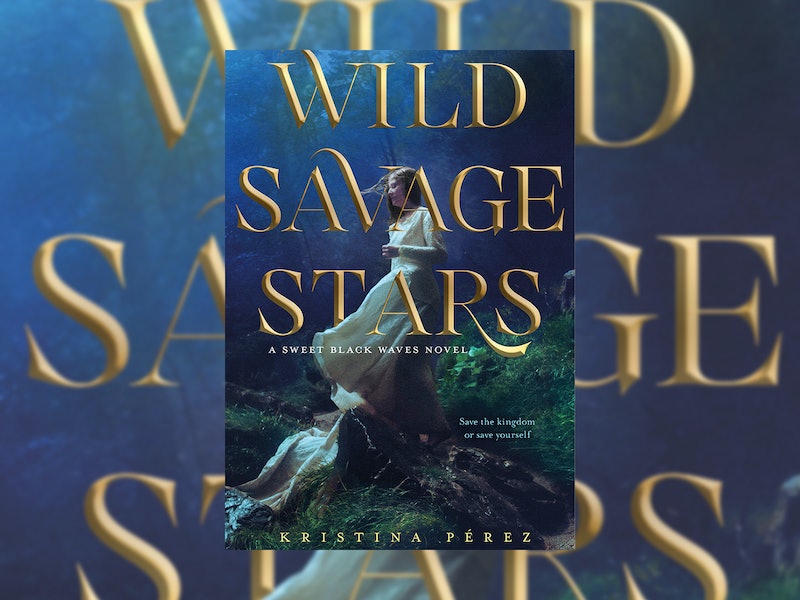 You have probably heard the legend of Tristan and Isolde, hopefully not because you've seen the James Franco movie. The timeless Celtic story is truly one of the most melodramatic and wrenching romance of all time — one that countless writers have used as the inspiration for their own tales of love and woe. In the Sweet Black Waves series, author Kristina Pérez uses the legend as the foundation for a story about dark magic, betrayal, and unexpected love. The first book in the series, Sweet Black Waves, is available now, but the second book, Wild Savage Stars, doesn't come out until next year. Luckily, Bustle has an exclusive first look at the cover and an excerpt of the novel below.

Here's what Wild Savage Stars is all about:

"Branwen has a secret powerful enough to destroy two kingdoms.

Her ancient magic caused a terrible betrayal by both her best friend, the princess Essy, and her first love, Tristan. Now this same magic is changing Branwen, growing ever stranger and darker. Adrift in a rival court, she must hide the truth from the enemy king by protecting the lovers who broke her heart. Not everyone wants the alliance with Branwen’s kingdom to succeed — peace is balanced on a knife’s edge, and her only chance is to embrace the darkness within."

If that description has you desperate for more, you can begin reading Wild Savage Stars by Kristina Pérez, out in June 2019, below:

Beneath her feet, the soft dirt became a path of slick, moss-covered stones. The path crossed a small stream and water seeped into Branwen’s boots.

Shrouded in the mist, appearing as if from nowhere, emerged a circular hut made from snakestone. Before the hut stood a well, red stone gleaming dully.

The hairs lifted on the back of Branwen’s neck. “Where are we?” she called to Ailleann.

In some places the Veil between this world and the Otherworld grew thinner, and Branwen had the creeping sensation this was just such a place.

Pausing beside the well, the Wise Damsel shrugged. “People have come here for healing since before the Aquilans came to Albion. Since before the longstones were carved. They hang offerings in the trees to the spirits of the waters.”

Branwen approached the well and noticed that there were beeswax candles in various stages of melting around its base. “Whom do you worship?” she asked.

“I think, gods or Old Ones, they care little for the names mortals give them,” Ailleann said, her tone abrupt. “I tend the well now, and I heal those I can.”

She scanned Branwen with her eyes and she would have sworn the other woman could see right down to the bone.

“Including you, Branwen of Iveriu.”

Alarm streaked through her.

“I never told you my name.”

The Wise Damsel croaked a laugh. “Seer Ogrin is a friend of mine. He told me you’ve been helping at the temple.”

“I never told you my name.”

Oh. “I didn’t come here to be healed,” Branwen said, irritation and relief eddying inside her. “I need derew root.”

“There are plenty of pain-relieving herbs in the Morrois Forest.”

“I see.” She crossed her arms. “I have what you seek. I’ll give it to you if you agree to train with me.”

“I told you I don’t want my power.” Back in Iveriu, Branwen thought she’d been wrong to reject the Old Ways, the healing magic she shared with the other women in her family. But Branwen’s magic had wronged both Tristan and Eseult, wronged her kingdom.

“Stop lying, enigena,” Ailleann said, invoking the Ivernic word for daughter. “You feel the power humming inside you — the desire to unleash it. Your instincts are at war.”

But Branwen’s magic had wronged both Tristan and Eseult, wronged her kingdom.

“I don’t have time to barter,” Branwen spat, her anger rising. “And I’m not your daughter!”

The Wise Damsel moved so fast Branwen didn’t have time to breathe before the older woman grabbed her hand and pain shot straight to her heart. Chest spasming, she fell to her knees. She screamed as she stared down at the Hand of Bríga: the mark of her goddess, the sign of her terrible power.

The scar on her hand had been transformed into a bilious black. Beneath the surface, it appeared to writhe like the Sea of the Dead.

“What did you do?” Branwen shouted.

Steam rose from the center of her scorching palm.

“I did nothing but reveal the truth you feel.” The Wise Damsel pointed at the midnight line, expression impenetrable. “From the same source comes creation and destruction––from the in-between. Primordial magic won’t be ignored.”

“Denying your gifts won’t make them go away,” The Wise Damsel said.

They’re not gifts, thought Branwen. I’m cursed, and I curse those who love me.

“Magic like yours attracts dangerous forces, enigena. Either you control your power, or it controls you.”

Branwen tried to breathe through clenched teeth, her chest heaving. She couldn’t deny the constant pressure of magic under her skin, the desire to break free, to run away and char the ground beneath her. When she’d fought the Shades, she’d been terrified but she had also felt alive. Exquisitely alive.

She could reduce all the seas to salt with her fire. Her wrath.

“Make it stop!” Branwen pleaded. She hated herself for whimpering. “I accept your terms!”

Once again Branwen didn’t see the Wise Damsel move, and then the pain was gone. The other woman kneeled before her, pressing her palm to Branwen’s. When she removed it, the scar had returned to its threadlike appearance, pale as the echo of nightmare.

She could reduce all the seas to salt with her fire. Her wrath.

Branwen remained on her knees, steadying her harsh breaths, as the other woman rose and walked toward the hut.

It was too late to back down now. Branwen pushed herself to her feet. She needed the derew root.

When she entered the cottage, Ailleann was pouring boiling water from a kettle into two ceramic mugs. She motioned for her guest to be seated.

The interior of the stone hut was more sumptuously appointed than Branwen would have expected for a dwelling in the middle of a wood. But, then, she was not altogether certain that she hadn’t passed into the Otherworld.

Branwen sat opposite the Wise Damsel at a table carved from oak.

Her host took a sip of her tea and cleared her throat. Branwen stared at the crushed, dried petals drifting along the surface of the water.

“Primordial magic is not given lightly,” Ailleann began. “To obtain this kind of power, you must have killed and saved.”

Branwen swallowed. The tea burned her throat. Queen Eseult had warned Branwen that the Loving Cup was primordial magic and its cost would be unpredictable. She had been naïve to think the Hand of Bríga stemmed from a less potent source.