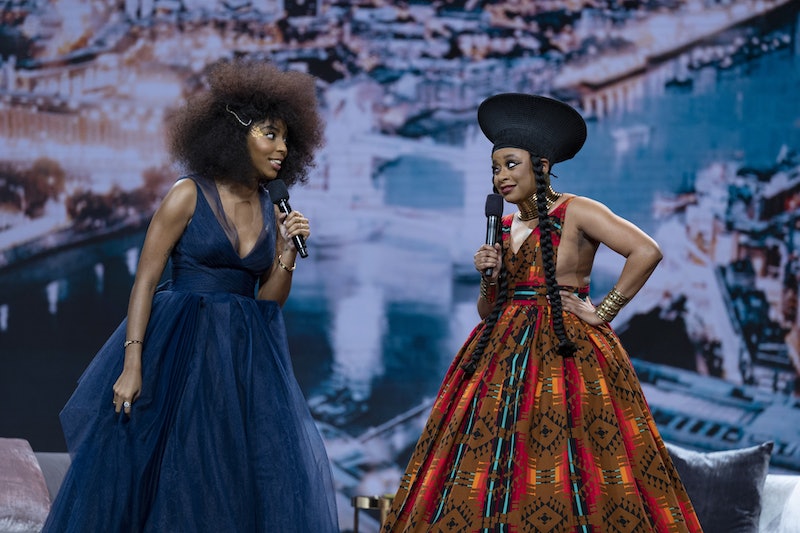 Jessica Williams and Phoebe Robinson built a comedy empire with WNYC's 2 Dope Queens. And though the podcast ended last fall, the show has continued in a series of filmed specials for HBO. The new visual format has allowed them to rock some truly incredible outfits while discussing everything from "Hot Peen" to "Black Nerds." But after the Season 2 finale airs March 1, will 2 Dope Queens return for Season 3? It's a little too soon to tell for sure, but Williams and Robinson's success thus far is a good indicator that it will be back.

According to Rolling Stone, the two comedians met when Williams was a correspondent on The Daily Show and Robinson appeared in one of her segments. They performed their first stand-up routine together at UCB, where Robinson was performing a live version of her old podcast, Blaria. "It's like when you have a bite of food that's really good or when you kiss someone and you're like 'Oh that kiss had a little extra oomph than what's normally in a kiss," Robinson recalled. "We hit it off and were like, 'Let's do it again.' Each show was like a date, and then it just ended up working out."

Their friendship begat their podcast, which then begat their HBO show. "We were having a really great run of podcast episodes," Robinson recounted to Rolling Stone, "and I said to Jess, 'This is a TV show. I think this is a variety TV show.'" Fortunately, HBO already seemed to be huge fans of what they were doing and didn't want them to change a thing. "I think we walked into our first meeting with HBO and were like, 'What do you guys want us to do? How can we sexify this podcast?'" Williams said in the same interview. "HBO was like, 'No, we just want you guys to do the podcast."

And that's exactly what they did. The series has featured the two women performing their stand-up as well as speaking with various guests and comedians — just like their podcast that fans already knew and loved. Since the show premiered on HBO in February 2018, they've had high-profile guests like Williams' former boss, Jon Stewart, Sarah Jessica Parker, Lupita Nyong'o, Janet Mock, and Daniel Radcliffe, among others. And the Season 2 finale promises to be exciting, with slated guest Keegan-Michael Key of Key & Peele and Friends From College.

"[Interviewing] is one of those things that seems easy when it's done well. But it's hard!" Williams told Variety in December 2018. "We try to have people of all orientations, genders, races. Period. We want to see melanin all throughout the show. So we try to find people who are interesting, but also people that we talk about. We talk a lot about pop culture on our podcast, and there are certain people that just come up." A particularly memorable celebrity appearance from Season 2 involved Lizzo twerking onstage while playing the flute, which was nothing less than iconic.

That said, Robinson and Williams are busy queen bees — Robinson's new book, Everything's Trash, But It's Okay, was released in October 2018, and she recently starred in the Taraji P. Henson comedy What Men Want. As for Williams, she appeared in Fantastic Beasts: The Crimes of Grindelwald (she's a noted Harry Potter fan), and will also star in the upcoming Hulu anthology Four Weddings and a Funeral. So the possibility of a Season 3 may come down to scheduling for them.

However, 2 Dope Queens Season 1 was well received, and it seems like fans are enjoying its latest installment, too. So if the two ladies can clear their calendars long enough to film four more specials (each season has been four episodes long), fans wouldn't complain. But even if two seasons are all we get of 2 Dope Queens, there's always the podcast backlog to listen to, since that's where the magic started in the first place. YQY, babies!