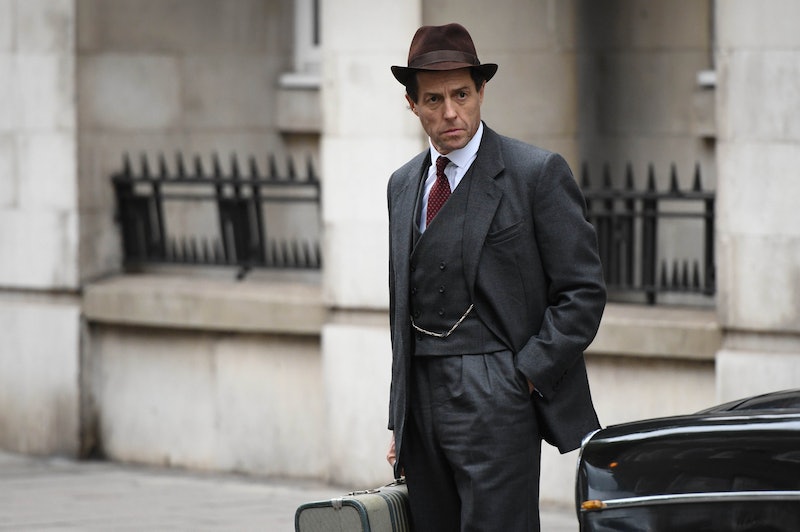 What happens when you combine Hugh Grant and Ben Whishaw in a dark, British comedy? A Very English Scandal, which originally aired on BBC One last month, comes to Amazon Prime on Friday, June 29. The three-episode miniseries is based on a 2016 non-fiction book of the same name by John Preston. As for the show, it was written by Russell T. Davies (Doctor Who) and directed by Stephen Frears (Florence Foster Jenkins). It's based on a real British political event, so, will A Very English Scandal return for Season 2?

For a bit of background, the show is based on a true story, and the action starts in 1960s London, per the BBC. Homosexuality was illegal at the time, and Jeremy Thorpe (Hugh Grant), Parliament's Liberal Party leader, began a clandestine relationship with a young stable hand named Norman Scott (Ben Whishaw). However, they eventually broke it off, and Jeremy was forced to keep his sexuality a secret, which threatened to sideline both his marriage and political aspirations.

However, the real kicker happened later — about a decade after Scott and Thorpe broke off their relationship, in fact. Someone tried to kill Scott, and he publicly accused his ex-lover Thorpe of conspiring to have him murdered. This became quite the scandal — an English scandal, if you will — and the Parliament member stood trial for attempted murder in 1979, per the BBC.

Over the course of all this, Thorpe was outed as having had a homosexual relationship. "I can't believe they can say this on the BBC," a shocked woman says in the below trailer. Eventually, Thorpe was acquitted of attempted murder, according to the same BBC story, but there is still some doubt as to what really happened, which A Very English Scandal appears to explore.

According to the same BBC story, Thorpe died in 2014 at the age of 85. Scott, however, is still alive, and Whishaw briefly met with him to talk about the role, according to an interview he did with Entertainment Weekly.

"What makes it very typically English is that it’s about a central character who is unable to speak the truth, express his feelings, [and] be frank about what’s really going on for him," Whishaw told EW. "There’s something a bit squashed about his emotional life, and that can be a very typical English thing. People struggle to say what they really mean here, particularly in that class and in that time."

And while this all sounds very heavy — between the homophobia, self-suppression, and attempted murder — The Imitation Game it is not. After all, this is an English television show, and no one blurs the lines between tragedy and comedy like the Brits. "There’s a sort of constant ambivalence about Is this something I can laugh at? Or is this something absolutely appalling?" Winshaw told EW about the show. "It’s sort of both, and you’re in a kind of wrestle with it the whole time."

The BBC One miniseries also stars The Crown's Alex Jennings as Peter Bessell and Patricia Hodge as Ursula Thorpe, among others. And if the trailer is any indication, the show looks to be a dark, pulpy, and self-aware hoot. "I was rude, I was vile, I was queer, I was myself," Scott says in the preview below, presumably referring to a public appearance of his.

So will the series come back for more iterations? So far, there have been no announcements, and audiences shouldn't be surprised if it doesn't return. British TV is different from American shows in that they are often short, self-contained miniseries, rather than ongoing stories. A Very English Scandal tells one very specific narrative, which was based on a book. What else would there be to tell?

However, these three episodes of A Very English Scandal are not to be missed. Not only has it gotten rave reviews, but it's the first time Grant has returned to the BBC in about 25 years, according to Variety. The actor's last appearance for the network was in an anthology drama called Performance. But between his roles in films like Sense And Sensibility, Notting Hill, and Four Weddings and A Funeral, Grant is one of the most recognizable British faces there is.