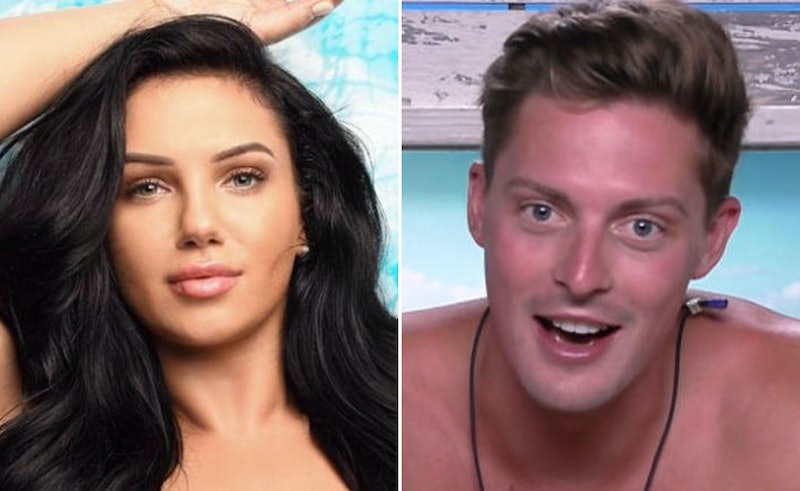 Dr. Alex George hasn't been the luckiest contestant on Love Island — but fans think change could be on the horizon following the arrival of new girl Alexandra Cane. On Friday, she sacrificed Idris Virgo and Kieran Nicholls' places on the show to couple up with Dr. Alex. To celebrate their new relationship status, the pair then enjoyed a rather lengthy smooch. But was Alex and Alexandra's Love Island kiss the real deal? Or is their nascent relationship doomed to fizzle out? I spoke to a body language expert to find out.

But first, let's take a look back at Alex's romantic history in the villa. After forming a platonic relationship with the sorely missed Samira Mighty, his first romantic relationship with Ellie Brown came to an abrupt end when she realised she didn't have feelings for him. A brief flirtation with Charlie Williams then ended after Alex realised he preferred Grace Wardle, but that relationship subsequently dissolved. But then, Alexandra entered the villa.

Alex and Alexandra's relationship began after Alex, Idris, and Kieran vied to impress her during the sexy fireman challenge. After Alex won Alexandra’s affections and the new couple shared a bed, Alex revealed to the boys that he was now a member of the Do Bits Society. Alexandra was delighted too, telling her fellow islanders "he’s so affectionate and you can just tell that he’s such a sweetheart," as Metro reports.

But back to that first kiss — could that tell us something about the bond between the pair? According to Elizabeth Lindsay Kuhnke, author of Body Language: Learn How to Read Others and Communicate with Confidence, the kiss didn’t seem the most romantic — although the high pressure context might have had something to do with that. Analysing the moment Alexandra announces her choice, Kuhnke tells me: "The body language between Alex and Alexandra seems stilted and distant rather than passionate and overjoyed."

Kuhnke continues: "When Alex embraces Alexandra, he first holds her at a slight distance at her waist before pulling her into him. When they sit on the couch, neither looks happy, and despite his attempt to pull her close, she doesn’t look at him, staring instead straight in front of her and breathing nervously.”

Kuhnke also notes that Alexandra "seems to be on the verge of tears of despair rather than excitement and jubilation,” adding, "They both appear to be consoling one another rather than exhibiting pleasure."

Still, it's important to keep in mind the context — Alex was consoling Alexandra, who seemed genuinely upset to be sending Idris and Kieran home. And the pair have both seemed excited about each other in less stressful situations — plus, they’ve had very little time to really connect. Let's not drop the curtain on Alexandra and Alex's relationship just yet, then!