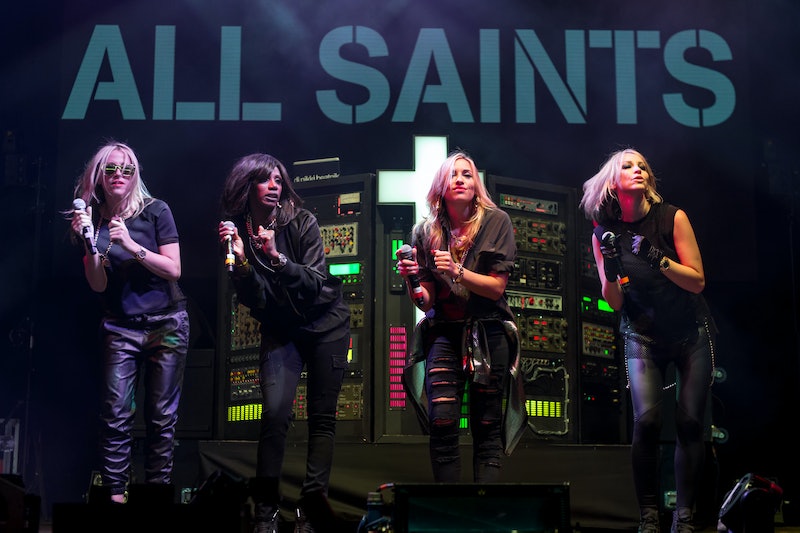 So far in 2019, there's been no shortage of 90s groups returning to the stage to help you relive your youth. The pop-loving 90s gal has been treated to a tour from the Spice Girls, while those living on the punkier side have got to enjoy the resurrection of Bikini Kill. And while you can't constrain All Saints to the 90s, they certainly got into their groove during that decade of girl power, too. So, if they were your 90s favs, then you're probably wondering: will All Saints tour the UK in 2019? Because it's time to take the ultimate nostalgia trip, and these four ladies need to make an appearance.

According to the group's official site, the dream of the nineties really will be coming back to life, as founding members Melanie Blatt and Shaznay Lewis, alongside twins Natalie and Nicole Appleton are set to play several dates across the country this summer. So, you've got a very good chance of getting back to those Purer Shores.

As of writing, the group's next show will be at Chepstow Racecourse on July 12, with tickets currently going for somewhere around the £30 mark, according to Bands In town.

They're then set to make an appearance at Nottingham's historic Wollaton Hall, home to the region's Natural History Museum, as part of Splendour Festival, where they'll be playing on Saturday, July 12. Tickets are still going, and start at £57 on the festival's site. Alongside All Saints, you'll also get to see Manic Street Preachers, The Specials, and Rag 'n' Bone Man, alongside many others, so it's certainly not the worst way to part with your cash.

Carrying on their string of iconic venues, they'll then be taking the stage at Cheshire's Grade II listing building Bolesworth Castle, as part of Car Fest North. Tickets are still going for both North and South Car Fest, which you can find on the festival's official site. You're also in luck if you fancy taking a trip to Ireland in August. They'll be playing at Leopardstown Racecourse, as part of Bulmers Live at Aug. 15, with tickets starting at just €17, a real steal if you ask me. According to the Leopardstown website, you can even just turn up and buy tickets on the day for just €20. Handy.

Next up on their summer schedule is SummerChime at Chiswick House in aid of Children with Cancer UK, which they'll be playing at alongside former X Factor stars Louisa Johnson, and headliner Liam Payne. A ticket for this one will set you back a little more, with general admission going for £83 on the AXS site.

If you want to see them at a slightly lower price, then you'll also be able to catch All Saints at Portsmouth's Victorious Festival, where they play on Saturday, Aug. 24. Day tickets start at £40 on the festival site, which'll also give you the chance to see Rudimental, James Bay, Lewis Capaldi, and plenty more. So there you have it, Never Ever should you pass up on a chance to see All Saints.