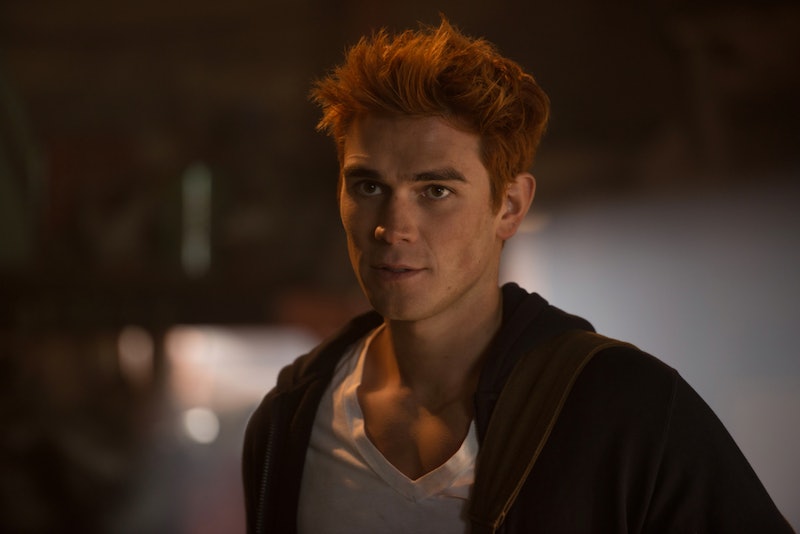 Spoilers ahead for the Riverdale Season 3 midseason finale. Since Riverdale is based on the Archie comics, it's only natural to assume that Archie Andrews will stick around for the duration of the CW series. However, in the Riverdale Season 3 midseason finale, our trusty Archibald skips town, this time taking his dog, Vegas, with him. As a result, it's unclear if Archie will come back to Riverdale, or if he's hit the road for good.

As a quick refresher, the redheaded fugitive has been on the run due to his never-ending feud with Hiram Lodge. Veronica's dad did Archie dirty by framing him for a crime he didn't commit, locking him up, and finally running him out of town. No wonder the couple broke up.

As a result, Archie and Jughead head for Jones Junkyard, where they reunite with Jug's mom, Gladys Jones, and sister, Jellybean (who goes by J.B. now, thank you very much!). However, their family reunion becomes short-lived when Penny Peabody shows up. With a knife to Archie's neck, she informs him that Hiram's put a bounty on his head. "Hiram won't stop — not until he gets what he wants," she tells Gladys after being tied up. "And right now that's Red."

However, Penny clearly isn't in on Hiram's master plan. While it appears that Hiram Lodge isn't the Gargoyle King (at least, if that final scene proved anything), he's still the master kingpin, and he ends up putting the entire town under quarantine. What's more, he arguably reintroduced both Fizzle Rocks and Griffins & Gargoyles to Riverdale. While Jughead is spouting off his grandiose G&G theories, his mom points out something important. "The big prize isn't Archie's head," Gladys says. "It is Riverdale, Jug. If you had your wits about you, you would realize that Hiram chased you out of town just to get you off of the chessboard. So you're far away from Riverdale when he [makes] his big play."

So, while Hiram clearly wants Archie dead, that's not his endgame. His goal, as Penelope Blossom elucidates, is to turn Riverdale into Vice City. And now that he's locked FP Jones, Jughead, Archie, and Fred Andrews out of town, his plan shouldn't be too hard to carry out. Not to mention the fact that they still don't have a sheriff (which, why??).

That said, it's extremely lame for Archie to bow out now — especially since that hasn't been his strong suit in the past (remember the Red Circle?). And now that the boys know they were forced out of Riverdale like puppets on strings, why wouldn't Archiekins return to protect his friends? Unless he's got a few more tricks up those extremely tight sleeves.

If Archie is setting out on some kind of side-quest, to expand on the Dungeons & Dragons comparisons, where is he headed? Since he and Jug had already walked for several days, it seems like they're already far away from Riverdale proper. Perhaps the Andrews boy is headed for his mom's house (we could always use more Molly Ringwald, TBH). Or could he even be going to Greendale?

Whatever the case, Archie gets to say goodbye to his dad before setting out on his own. And while nothing's confirmed in Episode 8, Archie does emphasize to his dad that this isn't goodbye (except that's what people say right before someone dies, so do we need to worry about Fred??). Hopefully we'll see Archie's rooster top back in Riverdale sometime soon — if he can find a way past the quarantine, that is.