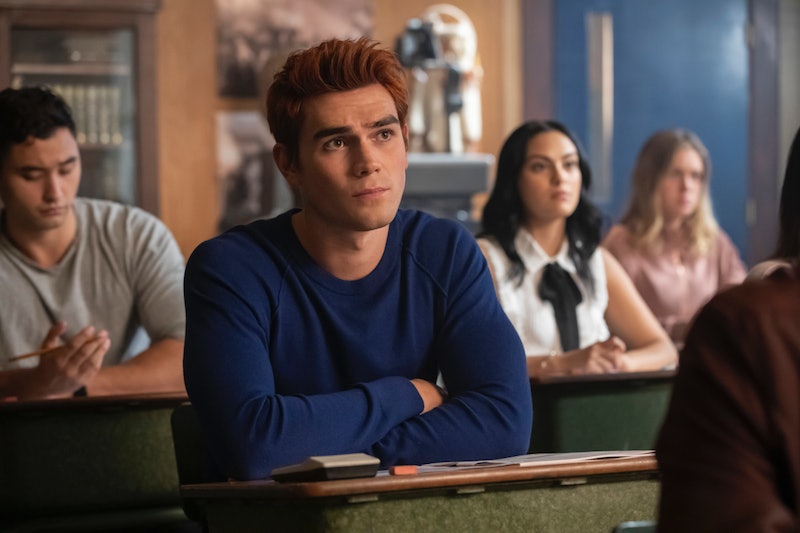 Varchie is officially dead — at least for the time being — and knowing what a serial monogamist Riverdale's red-headed protagonist is, surely he'll have a new romantic interest faster than a Griffins & Gargoyles quest. So who will it be? So far, the show seems to be planting the seeds that Archie and Josie might date on Riverdale — which, at the very least, might mean he starts playing music again. Please?

Our ginger hero has expressed an interest in returning to his singer-songwriter roots, and there was kind of a cute moment between him and Josie when he asked if they could jam again. "Like the old days," she said, referring to.... less than two years ago? Anyway, Josie also helped Archie sober up in "The Red Dahlia," and encouraged him to face his demons in a constructive way. This could be good for him. Their friendship could definitely turn into something more, especially as Josie seems willing to listen to Archie and be there for him.

Plus, it would be nice if Josie got to have a boyfriend on this show — she's honestly been left out. Josie has had some casual hookups with Sweet Pea, Reggie, and Chuck Clayton, but nothing more permanent. That's all well and good — Riverdale is a sex-positive show and not every fling has to be a relationship — but it's high time that this character got a real Riverdale love story of her own.

If Josie and Archie become a couple, it would definitely complicate Riverdale presents Heathers: The Musical in kind of a delicious way. Josie is playing Veronica Sawyer and her most recent ex Sweet Pea is playing J.D. — which means that they're probably going to address, or at least work around, their summer lovin' on the stage. More importantly, Archie and Reggie will play Kurt Kelly and Ram Sweeney, who in Heathers start a rumor that they had a threesome with Veronica (the one played by Josie, not Veronica Lodge) after aggressively hitting on her. Josie on stage as Veronica, with her ex and current boyfriend, who also happen to be the real Veronica's ex and current boyfriend, flipped? Delightful.

Betty and Archie, despite being a major pairing in the original comics, are probably never going to happen on Riverdale. And though, frankly, Val deserves some redemption (seriously, what happened to her??), it's very possible Archie and Josie could take their friendship to the next level, as both actors have already teased a Josie/Archie romance. KJ Apa told Syfy Wire in November that he's saved from his dark spiral by "a person and by music," while Ashleigh Murray told Comicbook TV that there's "definitely going to be some tangible lovey-ness happening this year" for Josie.

Seventeen also notes that fans were onto the actors' social media activity last year, and noticed that the two were spending more time together during filming. At this point, the chances of an Archosie get-together are strong, which could stir things up in a positive way for once on Riverdale.