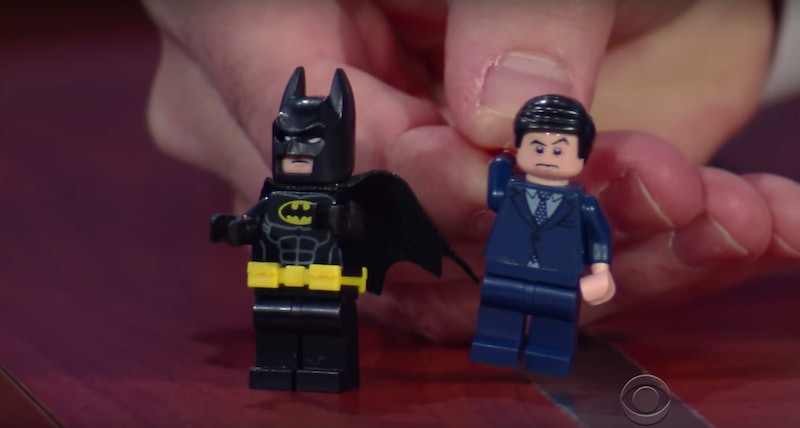 I have a dream. Admittedly, it's not going to revolutionize society or change life as we know it. But we all need to nurse a secret wish, however whimsical, so I'll make no bones about it: Mine was inspired by the Lego Batman and Stephen Colbert interview. I think all future celebrity talk show interviews should take place in Lego form. If you haven't seen the interview that's going to change how you want the talk show circuit to operate, you're going to need to stop whatever you're doing and check out the below.

Basically, actor Will Arnett went on The Late Show to do the usual spiel while promoting The Lego Batman Movie — in which he plays the titular role. He told some wacky stories about his sons, ages 6 and 8, who come hang out in the recording studio with him and record the voice parts for some orphans in the film, just because. And it's sweet, right? We all either have kids or know someone who has kids (or were kids at one time), so we half-smile at this. But then, Colbert took things up a notch and forced Arnett to do an interview as Lego Batman, while Colbert interviews him in his own Lego form. This results in what could very well be the Sistine Chapel of celebrity film promo interviews.

In the usual promotional interview, the celebrity is forced to coast on their charisma. They better come armed with some snappy anecdotes from their time filming to leave a good impression, and if they're lucky, they'll score a talk show with some sort of out-there game format. This will give them a break from navigating the tricky boundary between revealing enough to be interesting, but not revealing so much (sex stories, wacky diets, questionable childhood incidents) that they make the tabloids the next day.

This radical new method of the presenter interviewing the character — not the actor — makes more sense, because if we're watching a talk show interview, we're at least a little interested in the movie they're pushing. This way we get to learn about the character, see the thespian's acting skills in action (which is his or her job, not anecdote-telling, despite what you'd assume from the current way things are run), and also get to peep some adorable Lego figurines.

I'm just saying. Why isn't this a thing? We, the audience, win because it's more entertaining than most celeb interviews. The actor wins because they get to actually do their job, not make small talk or swerve questions about who they're dating. The talk show wins because they get more eyes on the screen. And Lego most definitely wins, because think of the megabucks generated by this epic guerrilla marketing idea.