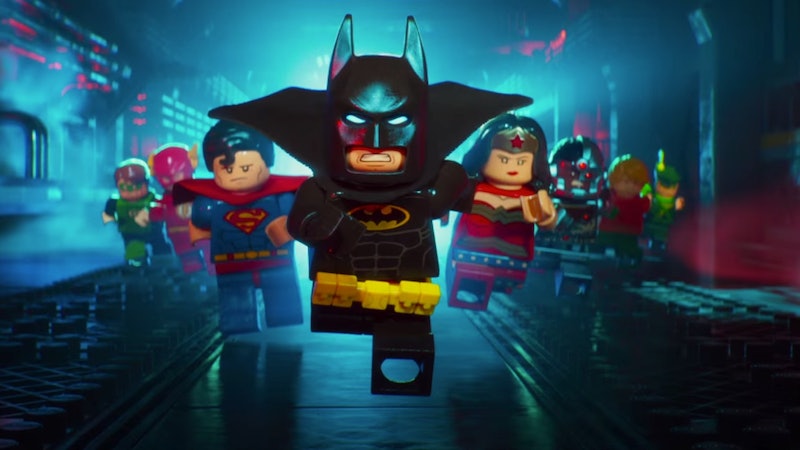 It's only been two months, and 2017 is already shaping up to be a year. With all that's going on, it would be nice if there was superhero that could make things all better. Thankfully, The Lego Batman Movie is the feel good movie we all need right now. And, that's exactly what the director and stars intended. "I wanted to make something where everybody, a little kid and an adult, could have a good time in the movie theater," the film's director Chris McKay told Bustle during the red carpet for the movie's NYC premiere. "It's a fun story of redemption and a guy being confronted with the fact that he might need to change his life and learn to love the people around him."

Despite Batman's change of heart in this new depiction of the beloved DC superhero, he's still the same vigilant protector that never turns his back on justice. Will Arnett, who voices Batman in film, is confident that his character would play great role in helping combat any of the injustices happening in 2017.

"Batman is potentially the great unifier and we need somebody right now to fight in the name of justice," Will Arnett told reporters on the carpet. "He’d be punching people out and making sure that nobody is above the law. He’s American, he’s from here, and he believes in justice."

If only we really had a Batman to have our backs as we head into the rest of this year — although we do at least have the movie. But, not only is this superhero good in a fight, he can also teach us a thing or two on how to value what's important in life. Arnett says that he thinks having this film in theaters right now is beneficial, because it will help get America laughing again.

"I think we’re living in a time, especially right now, where we could use a laugh," he says. "We could all use an escape, no matter where you stand or what your leanings are. I think it's important for people to go and have a good time and all agree to just have a smile."

One thing's for sure, there will be no shortage of laughs with Will Arnett and Michael Cera playing Batman and Robin in this fun Lego flick, which opened Feb. 10 for your (probably much needed) enjoyment.