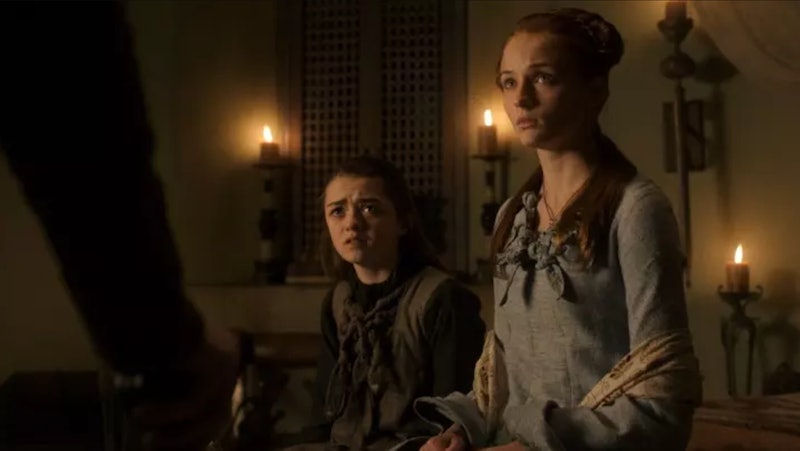 It's hard to believe that we are already more than a quarter of the way done with Season 7 of Game of Thrones, and if the first two episodes have taught us anything, it's that big things are happening quickly this season. In Season 6, viewers got to see a long-awaited Stark reunion between Sansa and Jon, but we GoT fans are greedy for more, and have an insatiable desire to see the Stark family all back together again. Each and every week, we're left dying to know if Arya and Sansa will reunite soon, but thankfully, it looks like it's going to happen soon.

There are many signs pointing to a sister reunion this season. First things first, Arya is already on her way back home. She originally was heading to King's Landing to cross Cersei off of her kill list after having served the Frey family her own Red Wedding revenge cocktail, but Arya later changed her mind and declared that she was returning home to Winterfell. This seems promising for a reunion, but we can't forget that this is Game of Thrones and the show is not known for making things easy for its characters. So even if Arya wants to go home, there are an innumerable amount of things that could go wrong on her journey.

But it is looking likely that she's on her way to Sansa. After all, Jon just left Sansa to go visit Dany at Dragonstone, leaving a vacant spot that Arya can fill in the ever-continuing Stark sibling power struggle in the castle. In a perfect world, Arya and Sansa would reunite in Winterfell and there would be no tension, then Bran would show up from the Wall, and then Jon's beautifully haired head would pop up last, thus completing all of my hopes and dreams for a Stark family reunion.

Alas, it seems like this perfect dream may never come true. Even if Arya and Sansa do reunite, there is a pretty small chance that it will be a good thing. Viewers only got to see Arya and Sansa together during Season 1 and while the circumstances were very different back then, they did not get along. There is a chance that they may be able to put aside their differences and let the fact that they are family bind them together and protect them from any sister squabbles. However, Sansa is acting as Queen in the North while Jon is away, and Arya is known for not following orders, so the chances for them to butt heads is very high. Fans can't let Sophie Turner and Maisie Williams' Instagram #goals friendship IRL distract them from the fact that Sansa and Arya never got along well on the show.

Williams was recently cast in the upcoming X-Men film New Mutants, and in an interview with ET Online, Turner, who is also part of the X-Men family, expressed some doubts about the sister reunion on Game of Thrones — but she was more optimistic for a reunion elsewhere. Said Turner, "It would be amazing if they could crossover at some point but I think we have more of a chance in the Marvel Universe than on Game of Thrones because we're not about happy endings on Game of Thrones."

A bigger understatement has never been spoken. I think we can all agree that an Arya and Sansa reunion this season is very likely, but the remaining question is: will it be a good thing?