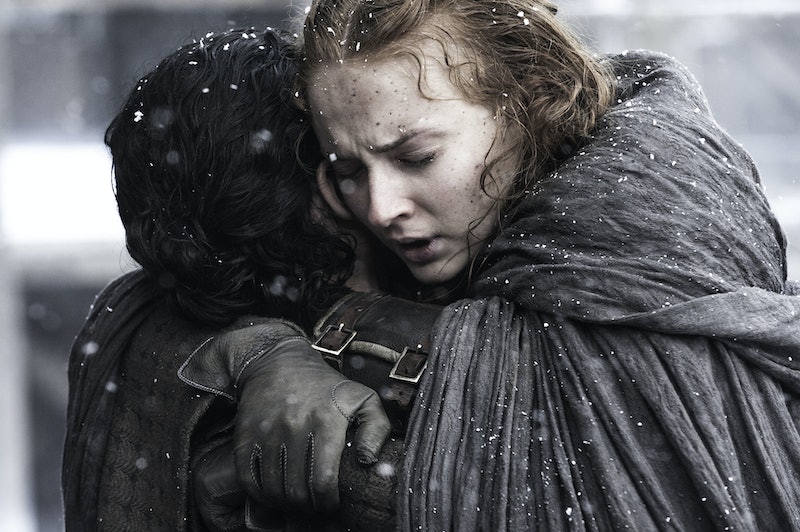 Game Of Thrones fans were blessed with the reunion of Sansa Stark and Jon Snow in Season 6. As luck has never been on the side of the Starks, it would be greedy and — more importantly — unwise to wish for another Stark reunion on Game Of Thrones. Yet, the chances of a Stark reunion in Season 7 of Game Of Thrones seem fairly high. And while that seems like it should be a happy moment for Ned Stark's brood, it might not actually be such great news. But before getting all doom and gloom about this, let's investigate how likely it is that Bran and Arya will join Jon and Sansa at Winterfell.

At the end of Season 6, Bran was headed to the Wall with Meera, and Arya was at Riverrun assassinating Walder Frey and his family. With the youngest surviving Starks both being geographically closer to Winterfell than they have been for seasons, they seem poised to return home. Yet, as has been proven time and time again, many roadblocks can pop up during a journey on Game Of Thrones, so their physical locations from Season 6 don't necessarily prove a homecoming is in the cards.

However, with Season 7 premiering on July 16, photographic evidence of a potential Stark reunion does exist — some that has been officially released by HBO and some that qualifies as spoilers. Focusing on only the spoiler-free official photos, they don't tell a complete tale, but still very much point to Bran and Arya making it to Winterfell — even if they are vague. For example, a photo on HBO's media site from the Season 7 premiere, "Dragonstone," shows that Meera has already made it to the Wall.

The photos also show that Jon's buddy Eddison Tollett, whom Jon made the acting Lord Commander of the Night's Watch, is there to greet Meera — and presumably Bran. So there's no way that Edd isn't going to tell Bran that Jon is alive and back at Winterfell, right?

To further confirm that Bran will make it to Winterfell, the second trailer for Season 7 shows Bran sitting in a wheelchair by a weirwood. Jump to 1:03 and see if you think he's at the weirwood at Winterfell because it sure looks like he is. After all, where else is he picking up a wheelchair in the North?!

As for Arya, Entertainment Weekly shared exclusive photos from Season 7 in May 2017 that showed her approaching a castle gate on horseback. Rumors started pouring in that this was really Arya approaching Winterfell.

Yet, EW would not commit to it being Winterfell, writing, "Arya Stark (Maisie Williams) mounted up and on the road — but to where? — in Season 7." Of course, Arya made her intention to return home to Winterfell clear in Season 6. Considering the last time she almost had a family reunion the Red Wedding occurred, it would seem particularly cruel — even for a series as notoriously cruel as Game Of Thrones — for Arya to get this close and not meet up with Sansa and Jon in Season 7.

Yet, just because the Stark reunion appears to be happening in Season 7 doesn't mean it will be full of feel-good moments. Jon and Sansa are already at odds and that's only going to get worse the more Littlefinger meddles. (Get out of here, Baelish!) And Sansa and Arya notoriously never got along and that probably hasn't changed much as their paths have diverged even further. When it comes to Bran, he probably won't have the same animosity toward his siblings, but he knows the truth about Jon Snow's parentage, so — even going beyond the fact that his purpose now is not to be a Stark but to be the Three-Eyed Raven — his presence will cause some drama.

Bran actor Isaac Hempstead Wright even admitted as much with Mashable reporting that at the Los Angeles Season 7 premiere, Wright said this about a family reunion:

"There's no way [the Starks] can just go back to being a family again ... They're all just such different characters now. I mean, they were different to begin with, but still brothers and sisters. Now, Arya's an assassin. Bran's a tree wizard. And Sansa's this conniving political mistress. So putting them back together again ... I think it would just end up being disappointing. That's why I don't think it should happen—because people would go, 'Oh. Oh no.'"

Damn, Bran. Even ignoring him calling Sansa a "conniving political mistress" (he more accurately described her as a "cynical diplomat" who has "been around some of the cruelest characters in the Game Of Thrones world" in a similar quote to TV Insider), what would Robb and Rickon say about his bleak view of the future?

Wright's quote is in line with what he said about a Stark reunion to The Hollywood Reporter too, but even though a reunion may be "disappointing," it doesn't mean it won't happen. And if the thought of an unhappy Stark family reunion has got you down in anticipation of the Season 7 premiere, then you should probably distract yourself by focusing on Entertainment Weekly's staged photo shoot with Sansa, Bran, Jon, and Arya.

This just may be the happiest you'll ever see them.