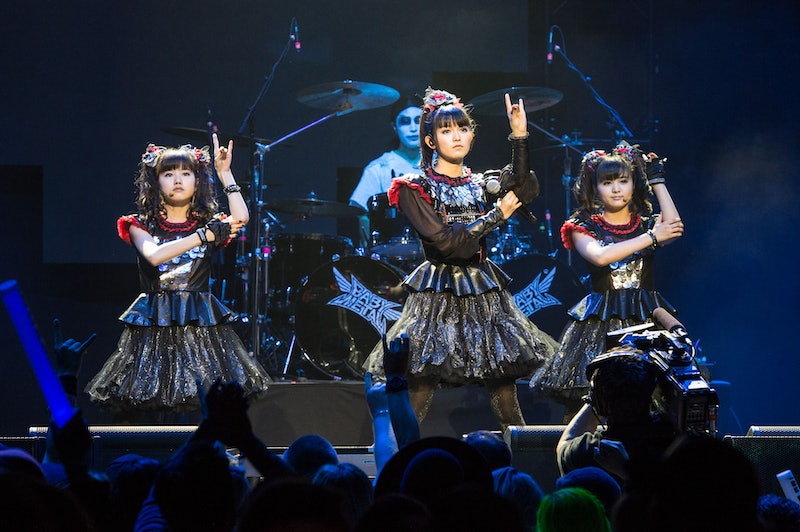 There's no show on earth like a Babymetal show. Cooking up a totally unique and unexpected mix of metal music and Japanese kawaii culture, this frenetic trio turned duo have been rocking out together for the better half of the past decade. They're no stranger to UK festival lineups, but you'll really want to experience this band doing their thing live. So, will Babymetal tour the UK in 2019? With plans to release a third album sometime later on in the year, they'll have plenty of new material to showcase, and their fans here in the UK are getting real excited about it already.

As they prepare to embark on a pretty epic tour of the U.S. — which includes their first ever arena show in the States when they play iconic venue The Forum on 11 Oct. 2019, according to their official site — the duo will also be making a quick pitstop in the UK. As Live Nation announced earlier on in the year, Babymetal will be playing their first UK headlining show since 2016, as they're set to take on the O2 Academy, Brixton on Tuesday, 1 July 2019.

You can purchase tickets for the show on Ticketmaster, but you'll have to be quick, as the numbers of tickets left are already pretty low. As of writing, I can see prices starting from £46, which might seem steep, but it'll be worth it for what might well be one of the funnest live shows of your life.

That's currently the only UK show listed, so I've reached out to one of their band's reps to see whether they'll come back for more later on in the year. So, stay tuned. But what I do know is that it might be a bit different to any Babymetal show you may have seen before. With the departure of band member Yuimetal, as NME reported on Oct. 19, 2018, Babymetal now exists as a duo, which I think could make their stage dynamic even more electric.

Since there's not a third person to make up the space, I'd expect to see more screaming, amazing dancing, and even greater gravitas from remaining members Su-metal and Moametal for their live shows. They've already proved that they can make it work as a duo with the release of their single "Starlight" on Oct. 19, 2018.

It's still unclear whether it'll appear on the band's upcoming album, which the pair announced via their Twitter page on April 1, where they described it as a "#NEWERA." Their latest single "Elevator Girl," which was released on May 11, 2019, signalled that shift, as the band took influence from drum 'n' bass to amp up their infectiously boisterous sound even further.

So, make sure to keep eyeing up those tickets, as well as the band's tour schedule, as you won't want to miss the beginning of Babymetal's new era. With another album on its way, the best way to get to know the newest iteration of Babymetal is to see them live in all their knee-jerking, arm-raising glory.