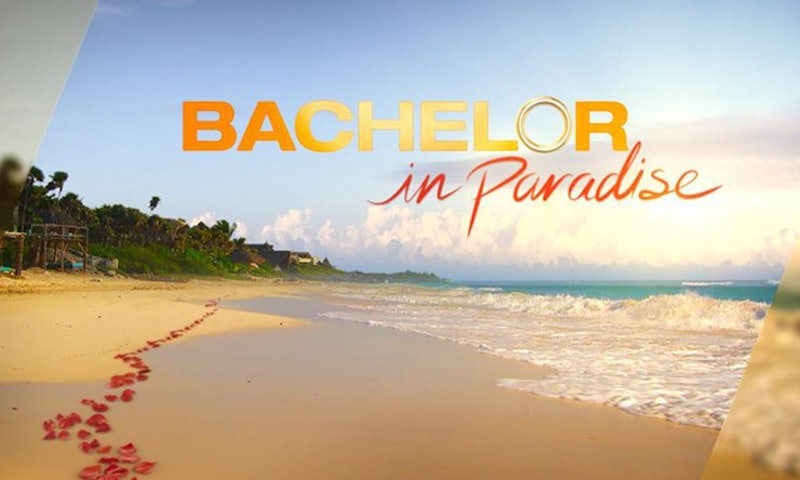 On Sunday, The Hollywood Reporter shared a statement from Warner Bros. that production on Bachelor In Paradise Season 4 has been suspended amid some "allegations of misconduct." Since this shocking news arrived less than a week after the cast for the show was announced, fans are understandably concerned about whether Bachelor In Paradise Season 4 will resume production. An official statement on the future of Bachelor In Paradise hasn't been released yet, but there are some details that may complicate the continuation of the season. It also seems reasonable to assume that the Aug. 8 premiere date will, at the very least, be delayed. Bustle has reached out to ABC for comment, but has yet to receive a response.

Update #1: In a video posted by TMZ, Jackson says "no comment" in response to numerous questions about the alleged incident. Asked if he's upset about reports alleging that Olympios claims she did not give consent, Jackson responded, ""No, no. I'm all good."

Earlier: The statement released regarding the suspension of Bachelor In Paradise's production was respectfully vague, while still suggesting that whatever "misconduct" took place is a serious one. It reads:

However, since then, new allegations have been reported regarding the circumstances of the alleged misconduct in question.

According to Entertainment Tonight, an unnamed source "close to the Bachelor In Paradise cast" has alleged that Demario Jackson, a previous contestant on The Bachelorette, and Corrine Olympios, from the most recent season of The Bachelor, could be the two Bachelor In Paradise contestants in the middle of the controversy. The source also claims that the "allegation of misconduct" may have reportedly been raised by a producer on the show:

"DeMario was in the pool. Next thing you know, Corinne comes over and hops on his lap. They start talking and joking. Everyone is just going about their business. Cameras are rolling. Producers are everywhere. That's when a 'third party' felt uncomfortable, claiming misconduct in the workplace. As of right now, production of Paradise is suspended indefinitely. And they are sending everyone home and telling everyone else to stay home. DeMario and Corinne got sent home soon after."

The Entertainment Tonight article also reported that Jackson and Olympios are still "both speaking and on good terms." However, this version of events has yet to be officially confirmed by ABC or Warner Bros.

If true, though, this claim suggests that the season may only be suspended, not cancelled indefinitely. However, if posts on social media are to be believed, then it looks like we might have a bit of a wait on our hands at the very least. On Instagram, one Bachelor fan posted a fun looking picture of herself with some Bachelor In Paradise cast members at the airport in Puerta Vallarta, Mexico on Sunday morning and the cast was definitely on their way out of Paradise.

According to a tweet by the blogger, Reality Steve, they've allegedly been relocated from this destination to Houston, though it's certainly unclear as to what that may imply for the season. While the details remain unconfirmed, fans can only hope that it doesn't mean the official termination of Season 4. But we'll just have to wait to see.