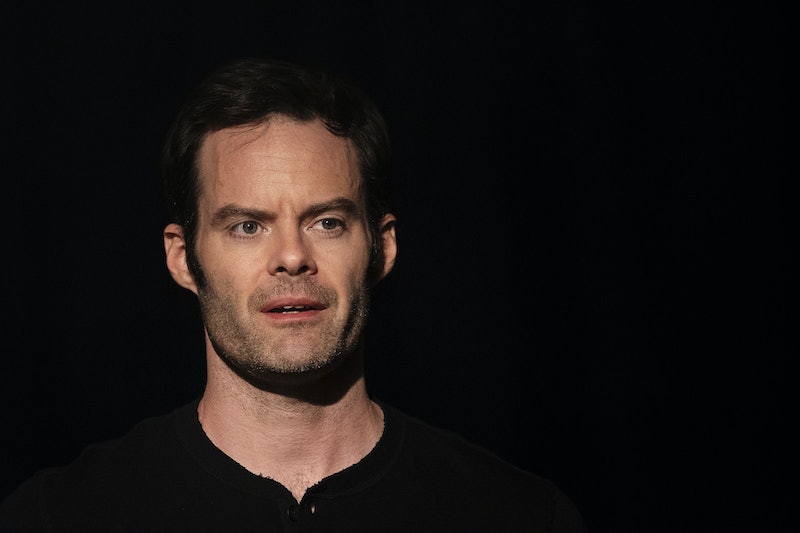 Spoilers ahead for Episode 4 of Barry's second season. Sunday night, the past finally catches up with Barry Block/Berkman. Detective Loach gets Barry on tape confessing to the murder of Detective Moss, and for a moment, it seems like the long arm of the law will be bringing him in for good. But then, in an outrageous twist, Loach says if Barry kills the man Loach's wife is sleeping with, "all this goes away." It's a tempting offer, but will Barry cooperate with Detective Loach?

It doesn't seem like he really has much choice — it's either kill this guy, or go to jail. But Barry is desperate to stop killing people, and has been for so long, so would it be possible that he'd rather just accept his punishment then continue being a person he hates? It feels like Barry is and will always be a vicious cycle of Barry running from his past — surely there's no way he can escape consequences forever. But it's only Season 2, so he probably won't give up just yet.

The most likely scenario is that Barry agrees to go along with Loach's plan — yet another "one last kill" scenario to add to his resume, even though it probably won't be.

But as we see Sunday night, Loach is truly hanging by a thread, and doesn't seem to be the most stable employer. We've seen him all season, moping in his cubicle while looking at photos of his wife's and her new love. We know virtually nothing of his relationship with his wife, or why it went south. In fact, nothing is really known about the deeper levels of Loach's character at all.

Actor John Pirruccello told the website 25YL last year that Loach was a "positive character" who "means well," so he doesn't seem like a sinister, looming figure like the mobsters Barry is used to dealing with. But he's still someone who seems desperate, and who probably hasn't done anything illegal in his life. He's muttering to himself, and frantically orchestrating a death out of jealousy. He's a loose cannon, and Barry probably doesn't want anything to do with that.

There's also the possibility that Barry agrees for now, but then tries to weasel out of actually killing this guy. Maybe he'll convince him to leave Loach's wife for his own safety, or threaten him until he's forced out of the picture. Maybe he'll ask some of his mobster friends to take care of the target, so he'll complete Loach's task without actually killing anyone himself. Or maybe he'll try and threaten Loach himself, turning the tables on the situation.

The bottom line is that there doesn't seem to be any end in sight for this vicious cycle that Barry finds himself in. Every single time he thinks he has an out, he's sucked back into this massive hole he's dug himself. It's unclear how exactly he'll handle this — but as is usually the case for our favorite hit man — there's no easy way out.