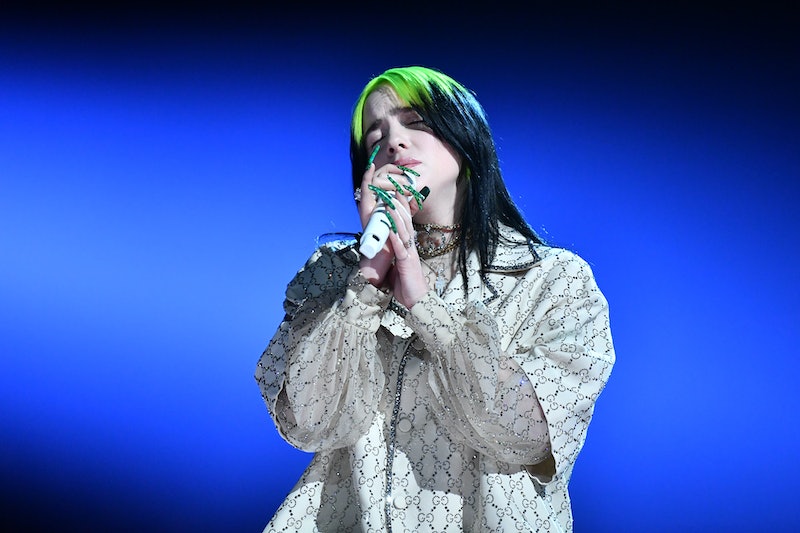 It's fair to say the past year has been a pretty monumental for U.S. singer Billie Eilish, and following her stunning Grammy Awards success — where she took home an impressive five gongs — it seems appetite for all things Eilish is only getting stronger. So, when will fans get a chance to see the "Bad Guy" singer perform live? And will Billie Eilish tour the UK in 2020?

Well, as NME reports, fans of the Brit Award-nominee have a lot to look ahead to in 2020, because Eilish is set to hit the road and embark on a massive UK arena tour later this year. The "All the Good Girls Go to Hell" singer will kick off her upcoming UK-leg with two shows at the Manchester Arena on July 21 and July 22, respectively. Eilish will then move onto perform a gig at the Birmingham Arena on July 24, before heading down to the O2 Arena in London, where the Grammy Award-winner is now scheduled for a four-night stint, which runs between July 26 and July 30. Tickets are currently listed as sold out on her official website, so fingers crossed some additional dates will be announced in the coming months.

As reported by Variety, Eilish recently enjoyed a big night at the 62nd Annual Grammy Awards in Los Angeles, where she became the most-awarded artist of the 2020 ceremony. The "When the Party's Over" performer bagged five awards in total — the majority of which were in the show's top four categories, including best new artist, record of the year, song of the year, and album of the year. The singer's older brother, Finneas O’Connell, also didn't go home empty handed, and walked away with two golden gramophones for producer of the year and best engineered album, non-classical.

According to The Sun, Eilish is also poised to storm this year's Brit Awards, where she is set to appear alongside the likes of Lewis Capaldi, Stormzy, Harry Styles, Mabel, and many more. In addition to being nominated herself, rumours have begun to circulate that the U.S. singer's upcoming James Bond theme could also be debuted at some point during the ceremony. So, it appears super-fans have another very exciting year ahead, and Eilish-mania isn't going away anytime soon.