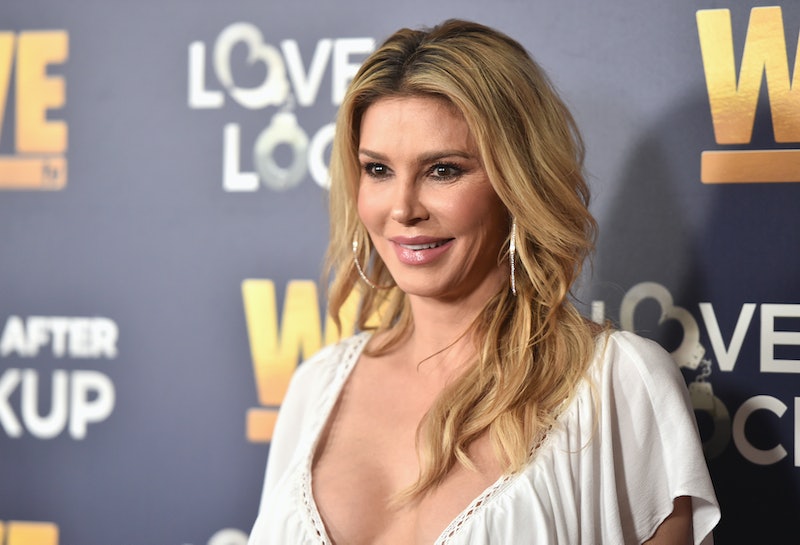 Brandi Glanville is like one of those extra things you throw into your purse for no reason — another pack of tissues, an extra hair tie, that spray that stops your poop from smelling when you use a public restroom. Ultimately, it clogs up your bag and takes up space, but boy, are you happy when it's there and you need it. Leave it up to Brandi to make drama and make Real Housewives Of Beverly Hills interesting again, no? So interesting, in fact, that Brandi could be at the RHOBH Season 9 reunion.

And that's fine — especially since Lisa Vanderpump didn't show up to the thing because she thinks all the other women have ostracized her. Lisa has already also passed on Season 10, to which fans say, "Eh." The show will go on without her. Like, with, perchance, Brandi? Brandi hasn't been a full-fledged cast member of Real Housewives Of Beverly Hills in a number of years, but that's hasn't stopped her from popping up when someone else needed her. Most recently, Brandi appeared on Real Housewives Of Beverly Hills to give new Housewife and good friend Denise Richards (who is the best thing that's happened to this show in years, don't @ me) some advice about dealing with Lisa Vanderpump. She could have some interesting info to share about other plotlines and women, too. She's kind of a pro at this stuff.

Sometimes, women who act as "friends of" on Real Housewives franchises get a seat at the reunion. Since Lisa isn't on the reunion and Andy Cohen confirmed, per People, that Camille Grammer Meyer showed up, why shouldn't Brandi get some airtime on the Real Housewives Of Beverly Hills Season 9 reunion? There's no word officially if Brandi attended the taping earlier this month, but why shouldn't she? She would at least be able to stir the pot a little and make things interesting, especially since Brandi seems to be thrilled that Lisa is on the outs with the rest of the women.

Most recently, Brandi went on a Twitter rant about how Lisa essentially ruined her life. There's definitely no love lost between these two. Brandi is also subtly pushing via retweet to get herself recast on Real Housewives Of Beverly Hills, and who knows? Maybe she'll be in Lisa Vanderpump's seat comes Season 10.

To Lisa's credit... wait, I can't think of anything. All of this "Lisa leaving" nonsense started, as the show has portrayed, because Lisa hoped to push Teddi and Dorit even farther apart than they already are by planting some tabloid stories and sending some text messages about the Lucy Lucy Apple Juice adoption. But it totally backfired when the others started to question Lisa's motives, and, as Brandi said when she made her cameo at dinner with Denise, admit that LVP has reportedly fed stories to the press in the past.

So, Brandi must feel a little vindicated, which means an appearance at the reunion or even on Season 10 isn't entirely out of the question.