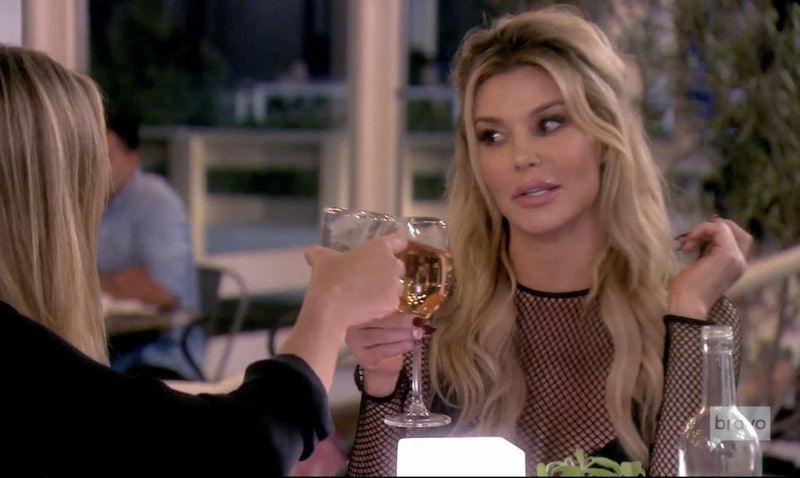 "Hello kitty cat," Brandi Glanville declared when she made her triumphant return to Real Housewives of Beverly Hills. Unfortunately, she didn't show up to an all-cast event, because watching the women's reactions would have been reality TV gold. However, Brandi Glanville's RHOBH conversation with Denise Richards was fruitful in many ways. Even though we are well into Season 9, Denise could not be any less involved in the drama or any less aware of what's going on. She is too busy living that newlywed life, raising her three daughters, and filming TV movies with her ex-boyfriend to really plug into everything going on with the other women. Luckily, Brandi came to help this Bravo rookie out.

Could Denise even give a synopsis of puppy gate? Probably not. Does she think that bunny gate is overly hyped? Definitely. Maybe she just doesn't like adding the word "gate" next to an animal. Nevertheless, she just hasn't formed any strong opinions about this season's drama so far. Meanwhile, the other full-time cast members are convinced that Lisa Vanderpump was involved in some plot to exploit Dorit's failed dog adoption for personal gain. And Brandi wanted to hear all about it.

Even though Brandi isn't even a cast member on the show anymore, she has a stronger opinion than Denise does on the drama. She even claimed that Lisa, "does have a direct hotline to RadarOnline, to be honest." Receipts, please. Denise played it safe when she responded, "I don't know her well enough to know if she leaked it for sure." Brandi looked frustrated as she tried to convince her friend of LVP's reported villainous ways.

Then, she gave Denise a brief lesson in RHOBH history. Brandi began, "Of course, she's gonna like you because you're young, pretty, and blonde. She liked Dorit. She liked me." And Teddi during her first season. (RIP to that friendship). Long gone are the days of Lisa referring to her as "Teddi bear" in between horseback riding sessions.

Brandi began to warn the new Housewife, "If you cross her in any way, which I did." Then, she got cut off when Denise asked, "Did you cross her or did you stand up for yourself?" Brandi channeled Lisa Rinna and "owned it." She admitted to Denise, "I kind of crossed her." She recalled, "I said, 'You're not telling the truth in this situation.'" And then they flashbacked to the magazines incident.

If you don't know what that means, let's rewind. After Kyle referred to Lisa as "Bobby Fischer" during the Season 2 reunion, it was hard for LVP to let it go. As a result, she grew closer with Brandi, who never got along with Kyle. This tension all came to head on the Season 4 trip in Puerto Rico. Brandi said that Lisa wanted her to bring magazines with stories that claimed Kyle's husband Mauricio was cheating on her.

Even though the couple denied the allegations, Kyle was upset that they were even discussing these claims, especially on the show. Lisa denied having anything to do with it, but Brandi stuck to her claims.

In her conversation with Denise, Brandi declared, "I've literally spent the last three years being punished for crossing her in a way." Brandi and Lisa started feuding on the show and Lisa "coincidentally" became close with Kyle again during that time. Then Brandi lost her full-time spot at the end of Season 5.

Still a novice at this game, Denise wondered, "How could she do that to a friend though?" Brandi explained, "In her head, she does nothing wrong." Wasn't Denise a Real Housewives super fan before joining? It's great not to judge a book by its cover (in this case previous seasons on the show), but shouldn't she be a little more savvy to the game?

Brandi came back ready to shake things up and share her side of the story. She may not actually be a part of this puppy gate story line, but the other ladies are finally saying what Brandi has claimed for years about Lisa. Will she back to talk more smack? An official Brandi Glanville return would be everything. Just imagine getting this tea week after week.