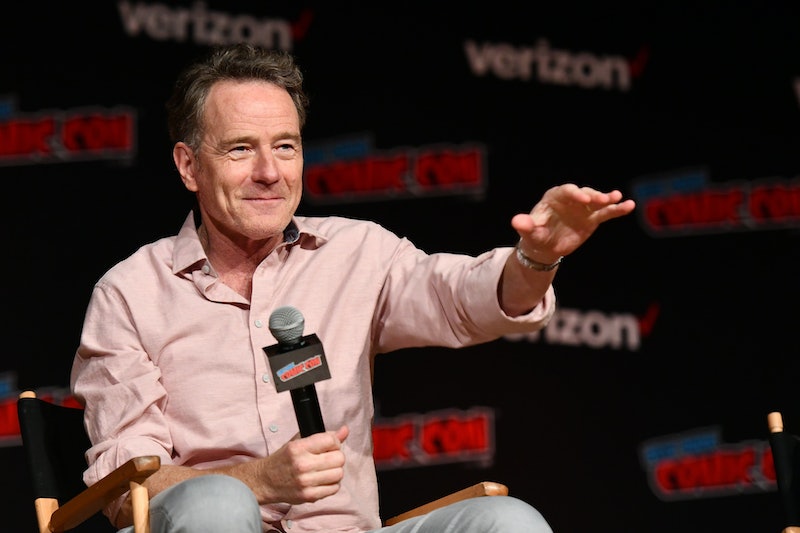 The man who played Walter White has some good news for Breaking Bad fans. For anyone wondering if Bryan Cranston will be in the rumored Breaking Bad movie, the actor revealed he may just have something cooking, during a call-in interview on the Wednesday, Nov. 7 episode of The Dan Patrick Show. “Yes, there appears to be a movie version of Breaking Bad,” Cranston, who starred in the AMC series from 2007 to 2013, confirmed to former ESPN host on his radio talk show. “But I honestly have not even read the script, so I couldn’t tell you.”

The news of a possible Breaking Bad movie first broke via The Hollywood Reporter on Tuesday, Nov. 6, with the the outlet citing unnamed sources who said that the Emmy Award-winning series' creator Vince Gilligan "is working on a two-hour movie, though it remains unclear if that will be released theatrically or made for television." (Bustle reached out to representatives for Gilligan, AMC, and producer Sony Pictures Television following the report's publication, but did not receive a response.)

While Cranston admitted in the interview that, because he'd not yet gotten a script, "there's a question of whether or not we'd even see Walter White in this movie," he would "absolutely" be interested in reprising the role for which he earned four Outstanding Lead Actor in a Drama Series Primetime Emmy Awards):

“If Vince Gilligan asked me to do it, sure, absolutely. He’s a genius, and it's a great story and there's a lot of people who felt that they wanted to see some kind of completion to some of these storylines that were left open ... This idea, from what I'm told, gets into those...at least a couple of the characters who were not completed as far as their journey."

As fans certainly recall, when Breaking Bad took its final bow in 2013, Walter White had died, and so the actor admits that — if his cancer-stricken high school chemistry teacher turned meth lab kingpin character is to return — he has "no clue" in what capacity it would be. Cranston, who revealed he has discussed the project with Gilligan, did venture a guess, however, that he could possibly appear in flashbacks. Another possibility is that the plot could follow the path of Breaking Bad prequel spinoff Better Call Saul, which stars Bob Odenkirk and wrapped its fourth season in October. (AMC also renewed the series for an upcoming fifth season.)

After THR reported that the project is currently being called Greenbrier, the Albuquerque Journal was able to infer that the film could likely center on Jesse Pinkman (played by actor Aaron Paul), who was finally freed from the clutches of his ruthless drug lord captors in the series finale. The reason? The newspaper confirmed via the New Mexico Film Office that a project titled Greenbrier is slated to begin shooting in Albuquerque in mid-November and will allegedly follow "the escape of a kidnapped man and his quest for freedom." They could not, however, say whether or not Greenbier is actually related to Breaking Bad. (Side note, for anyone who doesn't know: Breaking Bad both took place and was filmed in Albuquerque.)

Cranston — who's currently starring in the Broadway play Network — also told Patrick that returning to the role of Walter White five-and-a-half years after wrapping production would be like finding "a sweater you once wore" in an old suitcase.

"I think if I put on his clothes and shaved my head and put the glasses on and maybe the Heisenberg hat, I think those talismans could just send me back there quickly," he added.

Whether or not he ends up in the film, there will be no keeping Cranston away from the set — for reasons of nostalgia, if nothing else. "I'm excited about it because it's Breaking Bad," he said in his radio interview. "It was the greatest professional period of my life, and I can't wait to see all those people again, even if I just come by to visit."

While fans await an official confirmation from AMC, Cranston has now given them plenty of reasons to remain hopeful that the film materializes.