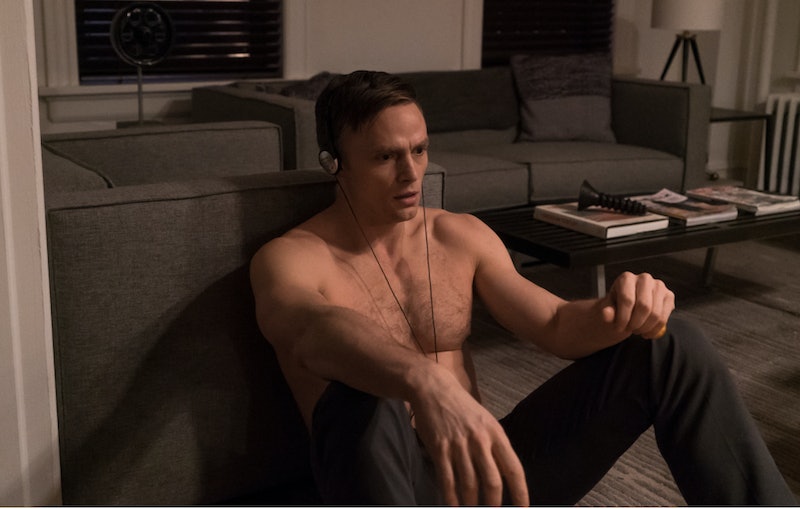 As Netflix's Daredevil ended its third season, it also made the suggestion that though one newly iconic character is down, he's not quite out. In the finale, after Dex, a.k.a. Bullseye, undergoes surgery following his fight with Fisk, he opens his eyes to reveal a bullseye pattern within them. This jarring moment hints that Bullseye might reappear in Daredevil Season 4, and judging by what people involved with the show have said, his continued presence in the show wouldn't be a surprise.

Bullseye's character was given a bit of an origin story than in the comics throughout Daredevil Season 3, allowing viewers to get to know the character, which first appeared decades ago in the Daredevil comics, in an entirely new way. It was confirmed shortly before the season dropped that a new character, Dex, would eventually become Bullseye, but it was a slow transformation. Wilson Bethel, who plays Dex, told The Hollywood Reporter that though no future storyline is solid, there's still more to explore with a fully-formed Bullseye if the show should choose to. And, of course, Netflix's Daredevil hasn't even been confirmed for another season yet, so it's all up in the air.

"There's nothing of any kind that's concrete about future plans, but I think even in this season, he’s not the Bullseye that people necessarily expect to see, which is a truly gleefully unhinged baddie," the actor said. "This season deals a lot with his descent, and what's going on in his head and how he expresses himself through violence, and finds some relief in that."

Showrunner Erik Oleson also neglected to confirm whether Bullseye is officially slated to come back next season, but he did divulge to ComicBook.com that Bullseye's character was always meant to have some sort of longevity throughout the series — he never wanted to introduce him as a one-off villain in a form people were already familiar with.

“I think that would satisfy some folks, but it wouldn't have satisfied me," Oleson said. "I just wanted to go for the deeper model. I think as in the future, if Bullseye were to appear in future seasons, I think that the audience is going to have a much deeper understanding and connection with that villain in the way that we have a deep and meaningful connection with Wilson Fisk after watching season one."

Daredevil’s set-up as it stands now would certainly lend itself to exploring Bullseye’s descent much further, even if those involved can’t say for sure just yet if that’s the plan. The reveal of the bullseye pattern in Dex’s eye could theoretically go either way— the show could be using it as a bookend to Bullseye’s now mostly finished origin story, or it could mean that they’ve just scratched the surface on what’s to come for the character.

The only other thing that could possibly affect whether or not fans see Bullseye again is the possibility that Daredevil as a whole may not continue. There is not yet any word on Netflix officially granting the Marvel series a fourth season, and a couple other big Marvel projects — Luke Cage and Iron Fist — received relatively unexpected cancellations last week. That’s not necessarily going to be the case for Daredevil, but Netflix’s Marvel universe does appear to be tightening, and hopefully, the show is given the necessary room it needs to continue exploring all the characters at hand.