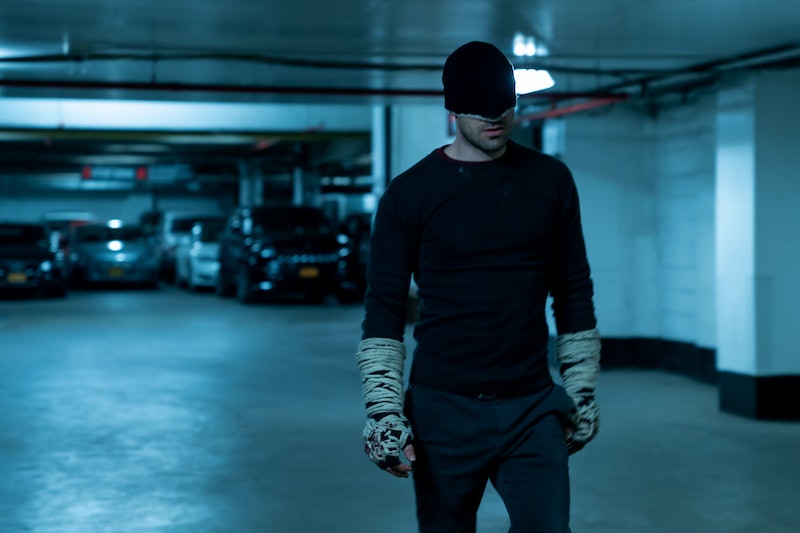 Spoilers for all of Daredevil Season 3 follow. Wilson Fisk's best day of his life turns a bit into a bloodbath when both Daredevil and Bullseye show up to his wedding to Vanessa. Daredevil fights both Bullseye and Kingpin in the Season 3 finale. Although Matt Murdock has been considering killing Fisk himself, he doesn't subscribe to Dex's version of justice. So while Matt's intent to bring down Fisk, he isn't about to let Bullseye do it in his phony Daredevil costume. The result is that Matt, Dex, Fisk, and even Vanessa all survive. But Daredevil's mercy doesn't make his battle with Kingpin and Bullseye any less epic.

Kingpin's signature white suit becomes particularly relevant in "A New Napkin" during his wedding to his beloved Vanessa. Matt finds out about Fisk's big day through Felix Manning and decides to crash the big occasion. But not before he tips off Dex about how Fisk had his "North Star" Julie killed. Realizing that Fisk had manipulated him and killed Julie, Dex becomes completely unhinged. So he rolls into the Presidential Hotel too, complete with Julie's frozen dead body, to take down Fisk during his wedding reception.

Matt had to know that telling Dex about Julie would set him off. And Bullseye clearing out Kingpin's security does help out Matt. Yet, Matt stops Bullseye from hitting Vanessa with the microphone and causing complete carnage at the celebration. Because even if he wants Fisk dead, Matt has to do vigilante justice his way.

As Bullseye is distracted by taking down the FBI agents who work for Fisk, Daredevil heads to Fisk's penthouse. Although Daredevil has seen visions of Fisk throughout Season 3, he finally comes face to face with his archnemesis. Fisk and Matt scream at one another before Matt rams into him. Meanwhile, Bullseye has made his way upstairs too and threatens Vanessa.

Daredevil knows that Vanessa made the call to have Agent Ray Nadeem killed (RIP Ray!), but he protects Vanessa from Bullseye. Even though it would be easier for Matt to work with Bullseye in bringing down the Fisks, his code means he's stuck fighting both Fisk and Bullseye at the same time. And, in a way, Fisk and Daredevil briefly join forces to protect Vanessa from Bullseye's wrath. And unlike in their first fight, Daredevil is prepared for Bullseye's wicked aim.

Fisk usually gives orders, but he shows his strength again when he throws Bullseye up against the brick wall, injuring his spine. That leaves Daredevil and Fisk to finish the battle. Matt splatters Fisk's own blood all over the Rabbit In A Snowstorm painting as he continually punches Fisk in the face. But Vanessa pleads for Matt to stop. Vanessa's screams reach Matt and he stops beating on Fisk.

However, Fisk taunts Matt when he says, "I will never stop hunting Karen Page or Foggy Nelson. I will tell the world who you really are." Fisk would rather die than be left to rot in a prison cell away from Vanessa. But rather than give Fisk what he wants, Matt sticks by his moral code. "God knows I want to, but you don't get to destroy who I am!" he cries. To keep Karen and Foggy safe from Fisk (and his identity a secret), Matt threatens to hurt Vanessa. Fisk and Daredevil make a deal and Brett Mahoney comes in to arrest Kingpin. Brett also helps to clear Daredevil's name by showing the other officers that the injured Bullseye is an imposter.

With Fisk back in prison and Bullseye out of commission, Matt ends the season by deciding to start practicing law again with Foggy and Karen by his side. Of course, that doesn't mean this is the end of Fisk or Bullseye by any means — especially since the season ends with Dex having his back operated on. But for now, Matt Murdock can go back to his day job with the knowledge that he never has to give up his moral code. Because if he can keep his values intact after Fisk and a Daredevil imposter challenge him, he can keep them through anything.