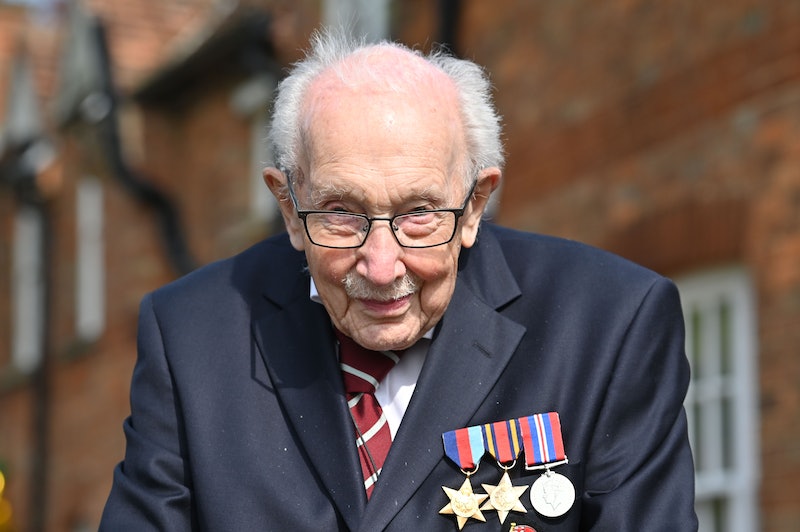 Captain Tom Moore touched the heart of the nation when he walked laps across his garden to raise money for the NHS during the COVID-19 pandemic. With with the total money raised now surpassing a staggering £33 million, the 100-year-old war veteran has been described as a "one-man fundraising machine" and a hero. Now it seems his efforts have captured the imagination of advertisers as Captain Tom may star in John Lewis' Christmas ad for 2020 and I'm already crying, to be honest.

The team behind the famous advert, Adam & Eve DDB, have reportedly pitched ideas involving Captain (or Colonel) Tom for the upcoming campaign. "Tom’s fundraising touched the nation and going forward he will remain a figurehead of what was good during the pandemic," a source told The Sun. "For many, Tom became totally unifying and those working on the campaign for John Lewis’ next advert want to join in that celebration."

The source continued: "It’s very early stages and the inclusion of Tom’s incredible record is very much still just ideas being pitched around. But after tapping into the public’s psyche it seems Tom is very much going to be man of the moment for a long time to come."

The retailer's yearly Christmas adverts are a renowned for their emotional and heart-warming scenes, including last year's story of Excitable Edgar. Following this year's pandemic, the 2020 advert will have to with capture the reflective mood of the nation.

For Tom, inclusion in John Lewis' Christmas ad would be just one of the many special acknowledgments he's received in recent weeks.

As is tradition when a British citizen turns 100, Captain Tom received a card from the Queen on his birthday (April 30, 2020). But it wasn't just any old card because. The birthday card revealed that the Queen had approved the army veteran to receive an honorary colonel of the Army Foundation College in Harrogate.

Speaking to the BBC about the honorary title, the Yorkshire native said: "I really am honoured by that and although I can't use it in public it really is something special to be able to say honorary colonel." He added, "I'm still Captain Tom, that's who I really am but if people choose to call me colonel, well, thank you very much!"

More like this
Lewis Capaldi Is “Really Sorry” After Pre-Sale Ticket Fiasco Guts Fans
By El Hunt
90 Epic Truth Or Drink Questions To Play 'Say It Or Shot It' With
By Bustle UK
Courteney Cox & Laura Dern Proved Their BFF Status With Matching Tattoos
By El Hunt
You’ve Got 'Love Island’s Farmer Will All Wrong
By Jack Orenstein
Get The Very Best Of Bustle/UK
Sign up for Bustle UK's twice-weekly newsletter, featuring the latest must-watch TV, moving personal stories, and expert advice on the hottest viral buys.