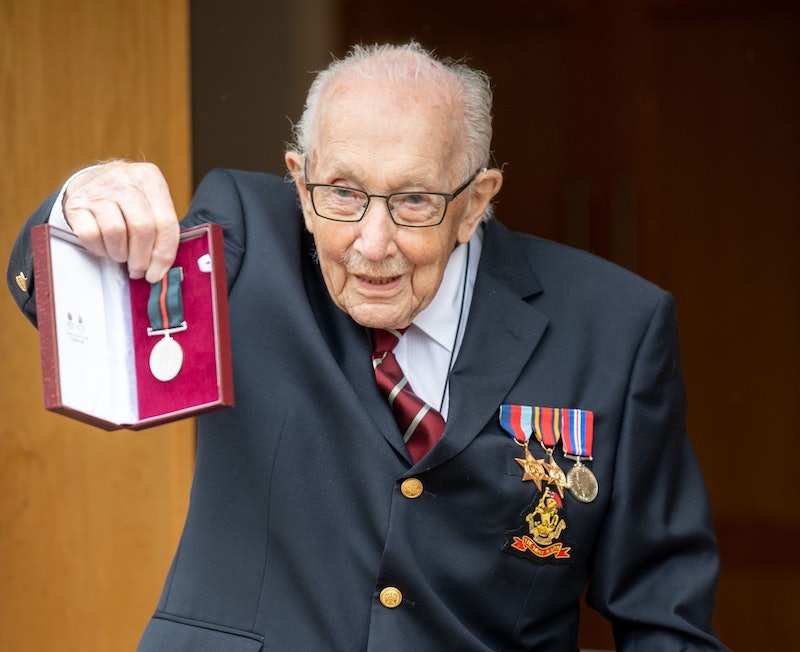 Let's all turn it up for Tom Moore as the captain himself has just hit a century in perhaps the greatest style ever recorded in human history. His centenary celebrations befit his style, having been rung in with class, hard work, and good old fashioned kindness. Raising £30m for the NHS by walking laps in his garden shot Captain Tom to international fame and now the whole country is coming together to wish him a massive happy birthday.

As is tradition when a British citizen turns 100, Captain Tom received a card from the Queen on his birthday (April 30, 2020). But wasn't any old card because, as the BBC reports, it revealed that the Queen has approved for the army veteran to receive an honorary colonel of the Army Foundation College in Harrogate.

Captain (or should I said Colonel) Tom learned of his promotion to honorary colonel in a letter presented by Lt Col Thomas Miller, commanding officer of the 1st Battalion The Yorkshire Regiment, who delivered it to his doorstep.

Speaking to the BBC about the honorary title, the Yorkshire native said: "I really am honoured by that and although I can't use it in public it really is something special to be able to say honorary colonel." He added, "I'm still Captain Tom, that's who I really am but if people choose to call me colonel, well, thank you very much!"

The RAF also showed their love on his birthday by organising a Spitfire and Hurricane fly by, which was especially moving for the veteran as he remembers seeing them in action when during the war. Speaking to the BBC he reminisced about seeing them flying "in anger" but "fortunately today they were flying peacefully."

As a lifelong cricket fan, receiving an England cricket cap from former England captain Michael Vaughan was an extra special treat for Captain Tom, as was all receiving 140,000+ birthday cards. People across the globe sent cards to his grandson's school to congratulate him and wish him all the best on his special day.

Captain Tom is an inspiration to us all, if only to help you realise that next time you're feeling too old and knackered to get a bit of fitness in, you absolutely can do it.