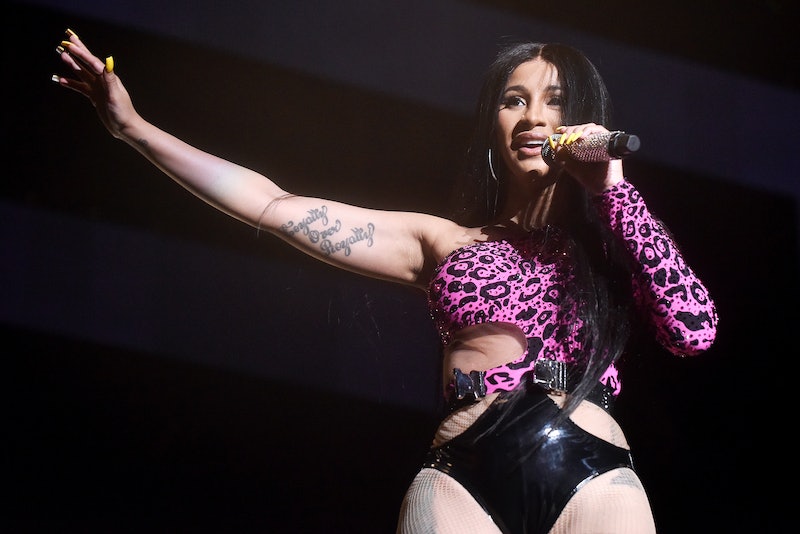 The American Music Awards are this Sunday, Nov. 24, and among those being honored are Ariana Grande, Drake, and Taylor Swift for Artist of the Year, and Billie Eilish, Lil Nas X, and Lizzo for Best New Artist, among others. The ceremony is being hosted by "One, Two Step" singer Ciara, while Kesha, Post Malone, and Christina Aguilera are slated to perform, to name a few. But although she's been nominated in the Best Rap/Hip-Hop category, there's no news on whether Cardi B will be at the AMAs or not.

However, she performed "I Like It" at last year's AMAs alongside J Balvin and Bad Bunny, so she may turn up this year. Whatever the case, it's clear that the "Bodak Yellow" singer has been busy recently. She recently did Vogue's "73 Questions" series, where she took viewers through her grandma's house in New York City — some of which featured her daughter, Kulture. When interviewer Joe Sabia asked what she liked best about her grandmother's apartment, she said, "That it's always packed with family. It's always distracting me from the chaos of the world and work."

In addition to "73 Questions," Cardi B was also recently in Netflix's rap competition series, Rhythm + Flow, where she served as a judge alongside T.I., Chance the Rapper, and a variety of guests. However, she was the clear favorite on the show, and it's no surprise why. Her larger-than-life persona was the comic relief that the competition series needed, and fans were all over it.

The series itself was well-reviewed, too, with Time calling Rhythm + Flow "the best music competition in years." The Season 1 finale aired on Oct. 23, when D Smoke winning the competition. "You're smart, you could be a leader, you're good looking — you know what I'm saying?" Cardi told the winner, per People. "You got it all." And while there's no news yet on whether Rhythm + Flow will return for Season 2, it's certainly likely, given the show's success.

However, her work in front of the camera is far from over. In addition to playing a character named Diamond in the 2019 heist movie Hustlers, Cardi will also be in the upcoming Fast & Furious Nine. In an Oct. 22 video from star Vin Diesel, the rapper said that she was tired but that she couldn't wait for the movie to come out (which premieres in May 2020). "I ain't gonna front, this is gonna be the best one," Cardi B said while sitting with her co-star in the U.K. Later in the same video, she shared, "I'm gonna take a nappy nap."

All that to say, there's no word on whether Cardi will make it to the AMAs, but 2019 has been a busy year for the rapper, and no one would begrudge her a "nappy nap" on Sunday night instead.