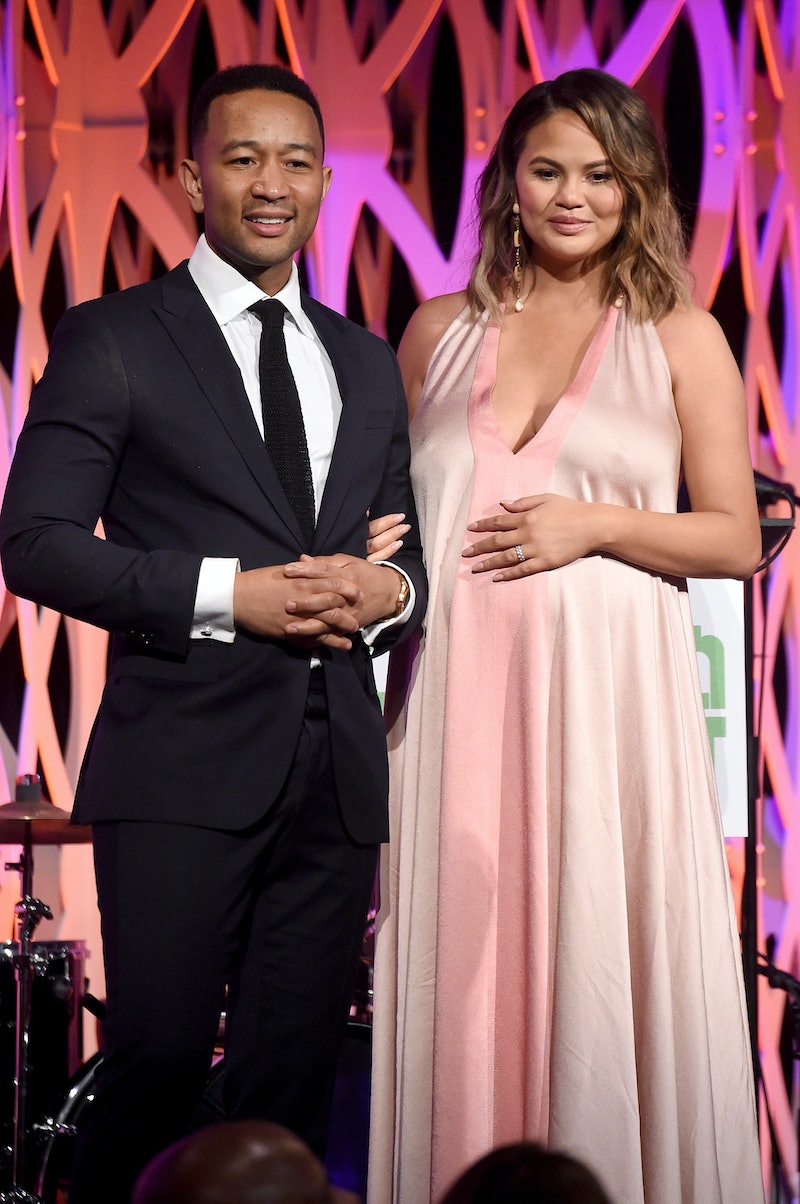 There's no doubt that Chrissy Teigen is John Legend's biggest fan. In fact, anyone who questions if all of her loves all of her hubby need only to see her cry face (now immortalized as possibly one of the greatest GIFs of all time) from the 2015 Golden Globes. But with the couple's second child born just days ago, the question on everyone's mind is: Will Chrissy Teigen be at the 2018 Billboard Awards where Legend is set to perform on Sunday, May 20 in Las Vegas?

While the supermodel and author hasn't yet confirmed whether or not she'll attend the annual music celebration, our best guess is that she might be sitting this one out. She's almost always at her man's side on his big nights, but right now her mind is on another boy: their son, who was born on Wednesday, May 16.

Update: Chrissy Teigen announced her son's name in an adorable Instagram of the baby boy during the morning of May 20:

Hello, world! This is Miles Theodore Stephens - We are drowning in his little peeps and nuzzles. Our household feels overwhelmed with love. Thank you for all your well wishes!

Earlier: “Somebody’s herrrrrrre!” Teigen tweeted that day, along with baby bottle and smiley face emojis. And though we'll have to wait to see the first pictures of what we're sure is an adorable baby boy (if she chooses to share them), the new mom did give a major hint about his appearance in a follow-up tweet hours later, when a fan asked if he looked like big sis, 2-year-old daughter Luna: "Same nose! He is a few weeks early so he’s litttttttle and makes the teeniest noises. We are in love."

After all, Teigen has been playfully providing updates about her pregnancy via Twitter. She tweeted the following in her classic Chrissy tone on February 3:

Looking back at 2017's Billboard Music Awards, where Legend performed alongside Florida Georgia Line, there's enough evidence that making it to the red carpet isn't going to be in the cards this year. When her man arrived solo, many wondered where the cookbook author was. The hilarious answer? She was seeing Magic Mike Live and chilling with her family.

"My sister and niece live in Vegas. I'm hanging out with them and not trying to force my back into a dress. But watching #BBMAs," she tweeted last May. So we definitely don't expect her to slip on couture son soon post-baby — and rightfully so.

Despite skipping out on last year's show, the Billboard Awards hold a special place for Teigen, as she co-hosted them with Ludacris in 2015. "It's one of the most truthful awards shows because it's about numbers," she told Billboard at the time.

The Grammy winner previously performed the song last month on The Ellen DeGeneres Show, much to the delight of the only other female to give his wife a run for her money when it comes to the title of his no. 1 fan. That would be their first-born, of course. Legend shared a Twitter video that melted all of our hearts of Luna dancing and clapping along — albeit adorably off-beat – while he performed.

“Hey @TheEllenShow! First of all, Luna loved the show. Still working on her clapping on the 2 and 4 but that will come…” he wrote.

While also appearing on Ellen back in February, Teigen admitted that she and her husband had been struggling to come up with a name for their son. “Boy names are really tough and I don’t think he will even have a middle name because we can’t even come up with a first name,” she joked.

She said that one thing is certain, however: The name John is off the table. “John and his ego was like, ‘I don’t want him to feel like he has to live up to that,'” the Sports Illustrated cover girl hilariously explained. “And I was like ‘Wow, you are a jerk.'”

In case they were still looking for suggestions, though, CBS' The Late Show host Stephen Colbert had another idea for a namesake. "If you haven’t picked out a name yet may we suggest Stephen?" read a May 17 tweet from the late night talk show's official account.

There was a problem with that idea too, pointed out Teigen: “But then he’d be Stephen Stephens!” (For those who don't know, Legend’s real name is John Roger Stephens.)

While there's still a chance she'll be at the award show to support her husband, her next celebration will more than likely be her son's birth. Either way, we're sure she'll at least be tuned in to Legend's performance, which you can catch on NBC at 8 p.m. ET.