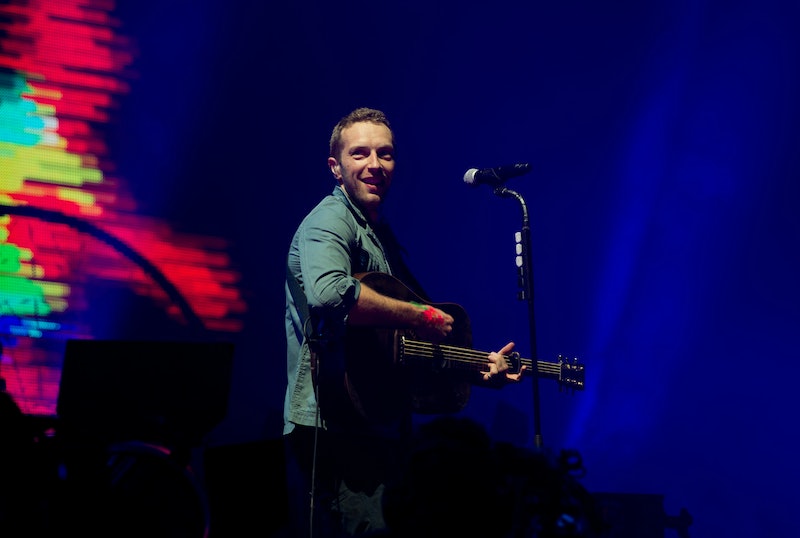 After the release of their career retrospective documentary A Head Full Of Dreams, it seems as though Coldplay are back in Britain's collective consciousness once again. After watching the band's journey from melancholy to kaleidoscopic optimism it's only natural to wonder will Coldplay be at Glastonbury 2019, and whether they'll bring their now signature vivid flair to fields of Somerset.

While it's possible, it doesn't look very likely. When asked what this years line up may bring at the 2018 NME Awards, festival co-creator Michael Eavis hinted to Radio 1 that there will be "two or three [acts] that have never played" the headlining slot before. That kinda pushes Coldplay off the ballot as they've headlined Glastonbury four times, which is more than any other act has at the festival according to BBC. I reached out to a representative of the band to further clarify whether or not there is a possibility of an appearance at the festival, but have yet to receive comment.

Until the headliners and line-up are fully confirmed (which usually is announced in April ahead of ticket resales) or the band say otherwise, I wouldn't completely disregard the possibility of the band turning up at Glasto just yet. Especially since it's been rumoured that Coldplay are planning a 2019 festival tour, which could easily include the Somerset festival on the roster.

According to Festi Leaks, this could include the likes of O Son Do Caminño Festival in the Spanish city of Santiago de Compostela, Rock in Roma Summer Fest in the Italian capital, and Slane Concert at Lord Henry Mountcharles's Slane Castle near Dublin. A tour like this would make sense, since the band haven't released new material since the release of A Head Full Of Dreams in 2015, which was supported by a world tour between 2016 and 2017.

It may be a while until some sort of announcement is made regarding a Glasto appearance, but that hasn't stopped multiple rumours circulating as which other artists could be topping the festival bill. Stormzy was the first headliner to be confirmed last November after posters were put up in Oxfam shop windows around the centre Glastonbury and the district of Streatham in south London, which is close to where the rapper was raised. This will be Stormzy's first headlining slot at the festival, as he previously played the Sonic Tent in 2016 and on the Other Stage in 2017, which supports Eavis's previous hints.

Kylie Minogue and Janelle Monáe are also confirmed for the festival, playing the "Legend slot" and the West Holts stage respectively. While April isn't that far away, it hasn't stopped the rumour mill spinning in regards to who else could be headlining. According to Betway, it seems as though The Cure and The Killers will be completing the headlining slots as their odds are pretty high. "The Cure are no strangers to the Somerset festival and we make them 2/5 favourite to rock it out once again, with the market suggesting The Killers at 8/11 are likely to join them," Betway's Alan Alger said in a statement to NME.

"It appears as if the remaining headliners are going to be bands with The Strokes (100/30), Fleetwood Mac (9/2), and Led Zeppelin (5/1) all prominent in the market, and you have to go down to Lady Gaga at 7/1 to find a soloist in with a chance."

At least you won't have long to wait until all is revealed. Who knows, maybe Coldplay will surprise everyone?