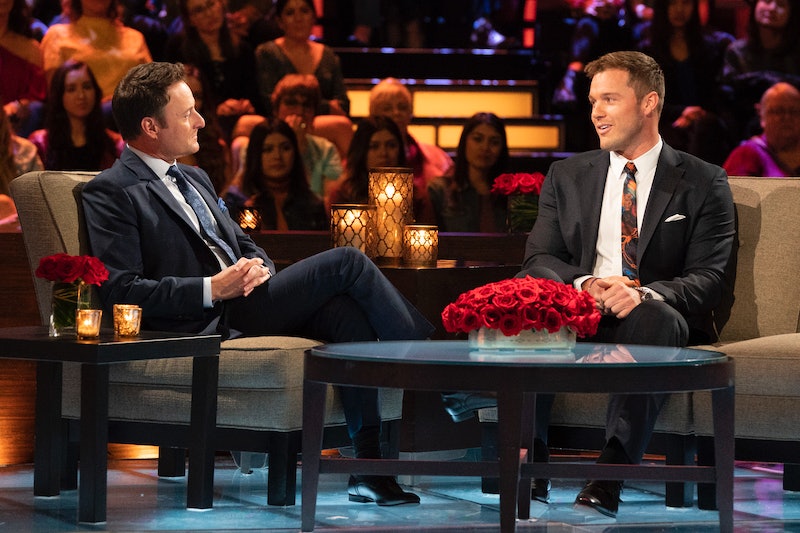 Well, Bachelor fans, there is good news and bad news. The good news is that we finally got to see Colton jump over a fence — you know, the impressive feat of athleticism that The Bachelor has been teasing out literally all season long. I’m not even mad, really, I’m just impressed. But Colton jumped that fence because Cassie, the girl that he thought he might end up with just decided to bail on him after a long and emotional talk with her dad and with him. So now that's he's walked off the set, which is something us fans have never seen, it's worth wondering whether or not Colton will quit The Bachelor or if he and the producers will find some way to salvage this whole situation.

It took until the fantasy suite dates for Colton to nail down the woman he wanted to end the show with — Cassie. But Cassie’s dad, being a normal, real dad and not the pushover parents that The Bachelor tends to show, told Cassie back on her hometown date that she needed to think long and hard about marrying this guy after only six weeks. Thanks, Matt Randolph! Normally, this is where it would end, but this isn’t a normal season of The Bachelor — on this season, Cassie’s dad redeemed some of his credit card miles to fly to Portugal to tell Cassie to slow her roll again. As soon as Colton said that he knew he wanted to be with Cassie, we knew this wasn't going to end well. No, sir.

When Cassie decided to leave because her dad made her realize she wasn't 100 on this relationship, Colton tried to tell her to stay (even revealing that he had already made his mind up about who he wanted to end up with). Colton simply wanted Cassie to finish the journey with him, but her doubts got the best of her (and she's entitled to that). But his begging wasn't enough, and Colton ended up jumping over a fence because you know, that's what one does when going through a "break up." He said he was "done with" The Bachelor. He ran away! He snuck off into the night! Even Chris Harrison wasn’t ready for that, because our favorite Bachelor host just stood there like a bump on a log trying to figure out what was really happening. It takes a lot to shake a man like Chris Harrison to his core. He’s seen so much.

Colton loves Cassie (he said so, so there), so there’s no reason for him to stay on the show if she’s gone. Colton doesn’t seem like a great liar, and he’s too earnest a guy to stay in this show simply for the star power — I know he’s already been on the franchise twice (hi, Nick Viall status), but Colton seems invested in this whole journey. So from where this Bachelor fan sits, Colton isn’t leaving or quitting. He’s in it. Which means that Cassie will either come back to The Bachelor after rethinking everything, or Colton somehow finds a way to win her back and help the season end on an optimistic note.

There’s no way Colton is bailing on The Bachelor, so get ready, fans — we’re bound to see some tears and maybe a reunion in the next seventeen hours of footage set aside for Women Tell All and the final Bachelor episodes. There's no way Colton is getting out of this without someone by his side. Although that would make it truly the most dramatic season ever.