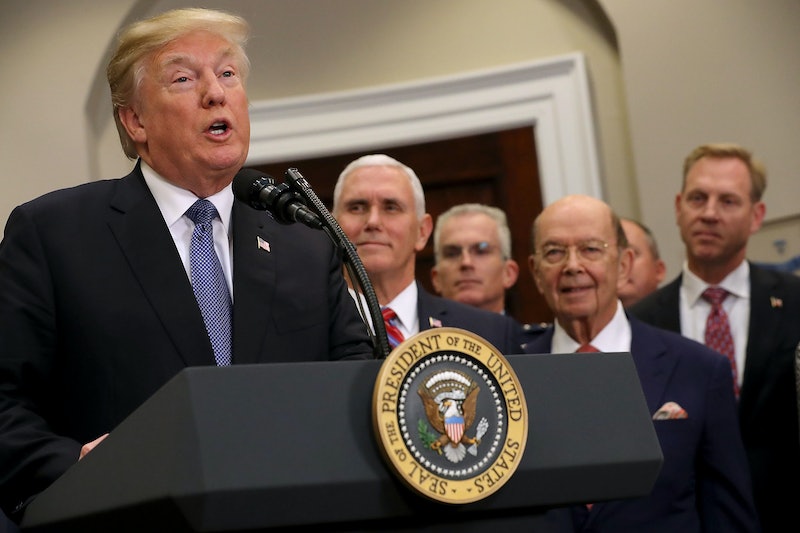 After Sen. Al Franken stepped down amid a Senate Ethics Committee investigation into allegations of sexual misconduct, many Democrats are wondering if the sexual harassment accusations against President Trump will be re-examined just as closely. So far, five senators have asked that the president resign over those allegations, all of which he's strongly denied. Now, one Democratic lawmaker is calling on Congress to investigate Trump for alleged sexual assault and harassment.

Rep. Gregory Meeks (D-NY) introduced a resolution on Tuesday requesting an investigation, either conducted by an already existing committee or a new one created especially to review the accounts of the women who've accused Trump of sexual misconduct. This resolution comes after Trump's accusers united to demand a congressional investigation. Fifty-six Democratic lawmakers stood behind them, calling on the House Oversight and Government Reform Committee to investigate these allegations (so far, the committee has not taken any action).

“In this pivotal time, when the nation should be able to look to a President for moral leadership, we must look elsewhere," Meeks says in a statement. "Instead of stamping out sexism, President Trump—who has bragged about committing sexual assault himself—has fanned its flames."

More than a dozen women have accused Trump of sexual harassment or assault. In October, the White House said its official stance on the matter is that all of those women are lying. "He has resorted to claiming that all of the thirteen women with credible sexual misconduct allegations against him are liars," Meeks says in the statement. "Well, it is time to get to the bottom of it."

On Monday, White House Press Secretary Sarah Huckabee Sanders said the White House would release a document that somehow refutes the claims of Trump's accusers, which span multiple decades. "I can say that the president has directly responded and said that these allegations are false and that’s what I’m doing and relaying that information to you," she said. "In terms of the specific eyewitness accounts, there have been multiple reports; I’d be happy to provide them to you after the briefing."

Meanwhile, Trump is not taking the news of a potential investigation lightly. He's already lashed out at lawmakers who called for his resignation, including criticizing Sen. Kirsten Gillibrand in a tweet that in itself appeared to be an act of sexual harassment. "Lightweight Senator Kirsten Gillibrand, a total flunky for Chuck Schumer and someone who would come to my office 'begging' for campaign contributions not so long ago (and would do anything for them), is now in the ring fighting against Trump," the president tweeted. "Very disloyal to Bill & Crooked-USED!"

But Gillibrand and the many other Democrats who are pushing for Trump to resign aren't backing down. "You cannot silence me or the millions of women who have gotten off the sidelines to speak out about the unfitness and shame you have brought to the Oval Office," she snapped back on Twitter. In a press conference, Gillibrand referred to Trump's comment as "a sexist smear attempting to silence" her, adding, "I will not be silenced on this issue, neither will the women who stood up to the president yesterday, and neither will the millions of women who've been marching since the Women's March to stand up against policies they do not agree with."

Meeks says Trump's response to Gillibrand is just another piece of evidence showing that his conduct needs to be investigated. "His lashing out at [Gillibrand] this AM is part of a trend that shows he does not respect women," Meeks tweeted when announcing the resolution. "We should know if he also sexually abused them." Should his resolution reach the House floor, it could potentially force Republicans to vote either for or against a formal investigation, according to The Washington Times.

But Meeks stressed that an investigation into allegations of sexual harassment against the president isn't a partisan issue. "Moral values are not exclusively Republican, nor are they reserved only for Democrats," he says in his statement. "I call on my colleagues on both sides of the aisle to live their moral values and support my resolution."

He also went on to talk about the importance of listening to women's stories and not being so quick to dismiss them. "When women share personal accounts of sexism and violence towards them, we should listen rather than summarily dismiss their concerns," he said in the statement. "We should investigate their claims and the people who allegedly committed them regardless of their status or station in life." He added of Trump, "No American is above the law and no office is exempt from human decency."