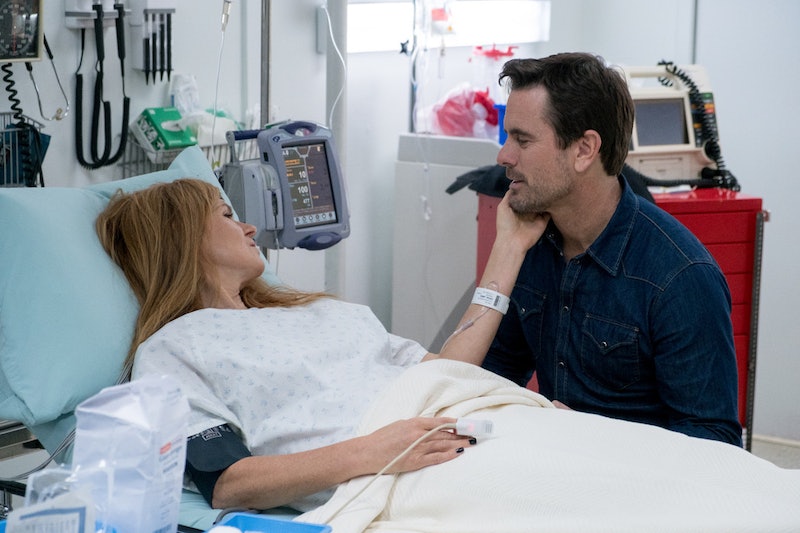 Spoilers for the Feb. 23 episode of Nashville ahead. Characters have narrowly escaped death many times on Nashville. There was the car accident with Deacon and Rayna, Juliette balancing on the edge of a building while contemplating suicide, and Juliette's plane crashing in the Season 4 finale. That's why it came as such a surprise when Rayna died on Nashville in the Feb. 23 episode, "If Tomorrow Never Comes."

Sure, viewers saw her get into a terrifying car accident in the final moments of the previous episode, but I can't be the only person who assumed she'd live to see another day and write a song about the experience. Though it's heartbreaking to say goodbye to Rayna Jaymes so suddenly, we can at least take solace in the fact that actor Connie Britton will return to Nashville in some capacity for one more episode, and is open to appearing in the future.

In an interview with TVLine, Britton confirmed that she has another episode and said, "I do pop back in in after Episode 9," before continuing, "And Nashville‘s always going to be important to me, so I’m totally open to whatever as time goes on. But it is really hard to say goodbye to this character." Of course, that doesn't mean the series will rely on such possibilities. As Britton says in the exclusive Variety video below, this twist only worked because Nashville is "in a good place continue on," and she's confident in its future.

Back in August, TVLine reported that Britton would only appear in 10 episodes this season out of its 22-episode total, which lines up with the actor's confirmation that Rayna will "pop back in." But that appearance would mean Britton's final episode this season, so I wouldn't expect to see her again for at least a while.

As for how the 10th episode could play out, it's most likely that we'll see her in either a flashback or some sort of dream. Nashville has been giving glimpses at the early days of Rayna and Deacon's career, so Britton could be seen again in a more extensive flashback. It's also possible that Deacon, Maddie, or Daphne will dream about or imagine Rayna as they cope with her tragic death.

No matter where Nashville goes from here, or how we see Rayna one more time, her presence will definitely be missed on the series every single week.