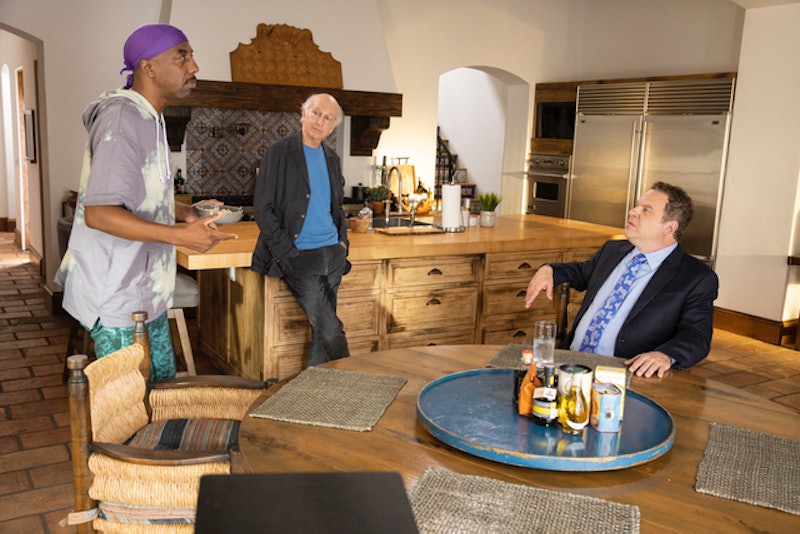 After the Curb Your Enthusiasm Season 8 finale in 2011, it seemed possible that there would never be another episode of Larry David's HBO comedy. Yet, the show made a triumphant return with Season 9 in 2017 and with Larry still having the time of his life irking other people in Season 10, it seems like Curb Your Enthusiasm will return for a Season 11. If David wants to continue.

Ahead of the Season 10 premiere, HBO's president of programming, Casey Bloys, told Deadline that the future of the series is entirely up to David. "The deal with Larry is that he tells us when he is ready to go. If he tells us he wants to do more, we'll do more," Bloys said. "He doesn't die or anything [in Season 10], I can reveal that now. There is nothing that would prevent [more seasons]. He's thinking about what he wants to do."

David hasn't provided any updates on the show's status since Bloys' statements were published on Jan. 19. But Curb executive producer Jeff Schaffer made some promising-ish remarks to The Hollywood Reporter: "I'll say this: Every season is the final season, but we're definitely talking about talking about it."

Curb was renewed for Season 10 a couple of weeks after the Season 9 finale aired with Schaffer noting how David had been excited to do another season right away. The EP didn't mention that same (ahem) enthusiasm for a Season 11, but he noted they had come up with additional storylines that didn't make it into the 10 episodes of Season 10. "We definitely have ideas that didn't fit in the season. Whether they'll fit into a next season is really hard to say," Schaffer said.

The Season 10 finale will mark 100 episodes of Curb, which is a nice round number to go out on. David told GQ that he wouldn't end Curb with a huge series finale event like he did with Seinfeld. Shaffer and David's only concerns are wrapping up any of the season's storylines, according to THR. That means Mocha Joe and Latte Larry should settle their scores, as well as whether Larry is taken to task for his behavior around his assistant.

David's humor is based in the perennial annoyances of life, a mixture that ensures that Curb Your Enthusiasm stays relevant whether it's on its 100th episode or its 1000th.