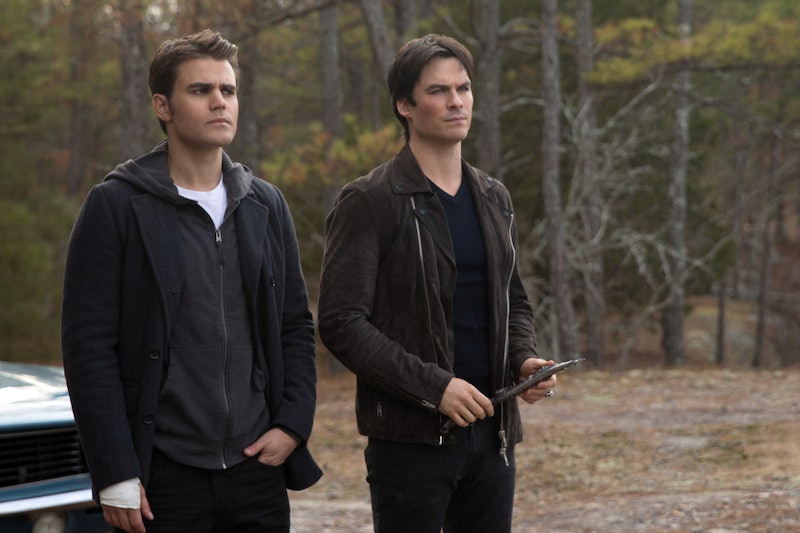 After eight seasons, The Vampire Diaries is coming to an end. It's been eight years of vampires running wild, doppelgangers stirring up trouble, and werewolves and witches getting into wars (not to mention the drama of school dances and applying to college), and man, it's been fun. The Vampire Diaries series finale "I Was Feeling Epic" will air on The CW on Friday, March 10, and I plan on watching with a big box of tissues. The end might be near, but fans are still clueless as to how the show will actually end. TVD loves to keep fans in the dark, and the finale is no exception. So, how will The Vampire Diaries end? I've got one theory on how Elena, Damon, Stefan, Bonnie, and Caroline could say goodbye, and it's not an altogether happy one.

Before you start cursing my name for even suggesting that the Salvatore brothers meet their permanent end, allow me to make my case as to why I think The Vampire Diaries could end with the deaths of the Salvatore brothers. Firstly, the deaths of Stefan and Damon would be a natural way to end the series, as they were the first immortals on the show. Over the course of eight seasons, the two vampire brothers have cheated death more times than I can count, and there's something natural to the idea that the show should end with them dying. No one can live forever, and even if they could, maybe Stefan and Damon shouldn't try. Secondly, Stefan and Damon's entire goal throughout the series has been to do one thing, and one thing only: save Elena. And it's likely they'll be forced to go to extreme lengths to save her one last time before the series is over. Perhaps this time, they'll have to give their lives for hers.

Should Stefan and Damon sacrifice themselves for Elena in the series finale of The Vampire Diaries, it would be extremely fitting to the spirit of the show. From the moment Damon and Stefan met Elena, the Salvatore brothers were saving her life. Time and time again, Elena found herself in mortal danger, and one Salvatore brother or another would be there to save her (or, at least, help her save herself). Even when Damon tried to act like he was above it all and not falling in love with Elena, or when Stefan turned off his humanity in servitude to Klaus, they would still do anything to save Elena. Maybe Kai will bind Elena's life to theirs instead of Bonnie's, or maybe they'll all be caught up in some new kind of fight with Cade. Whatever the circumstances, Stefan and Damon dying to save Elena would pretty much be peak TVD when you think about it.

Stefan and Damon dying together would also be a great way to end their journey as brothers. They became vampires on the same night, have risked their lives for each other and been there for each other over the course of hundreds of years. It seems fitting that they should die together too. Furthermore, they are the characters with the highest body count, and they could see their own deaths as the ultimate atonement for their sins, especially if they die saving a woman they both love.

Now, here's the good news. I have another part to this theory, which is that if Stefan and Damon die, they will not go to Cade's Hell. As Season 8's big bad, Cade will be defeated by the series' end, which means Hell will be destroyed, and any and all of our Mystic Falls crew will avoid an eternity of burning in Hell. Instead, I think they'll go to Bonnie's newly created afterlife and join Enzo on a new, Bonnie-approved Other Side. According to the Entertainment Weekly interview with Plec, the original finale involved ghosts — an idea that had to be let go after Bonnie destroyed the Other Side. But the finale can still involve spirits of those who have died (Vicky, Jenna, Tyler, John, etc) if they are now living in Bonnie's new dimension. This way, fans will know that all their favorite characters are at peace and that they will reunite with those still living someday, just not in the space of the living.

Who knows if anyone will make it out of The Vampire Diaries alive, and who knows how many characters will bite the dust in the series finale. I can only hope that whatever Plec has in store for the Salvatores and their friends is true to their characters and the eight years we've spent with them.