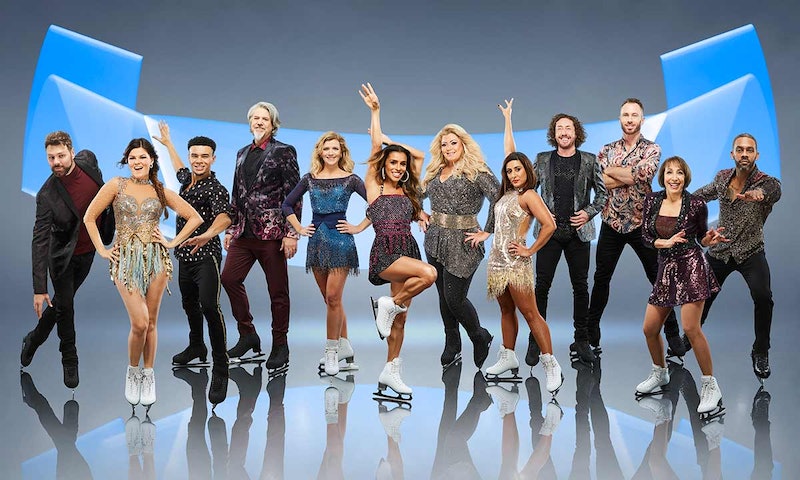 A load of inexperienced celebrities gliding along a hard slippery surface on razor-sharp blades? Now that's what I call entertainment. Whether you tuned in for the skills, the slips, the LOLs, or the banter — Dancing On Ice has been lit AF this year. Controversial from the get go and containing my personal favourite Essex Queen, the GC, Gemma Collins, it's certainly has kept weekend telly interesting for the past few months. However, it's all sadly coming to an end this weekend, and I, for one, am devved. So the question is: will Dancing On Ice return in 2020?

Update: ITV has now confirmed to Bustle that Dancing On Ice will be returning for another series in 2020.

Previously: As the finale of Dancing On Ice fast approaches, and with the majority of the contestants having hung up their skates for good, viewers are gagging for more of the good stuff. And who can blame them man? I'm guessing the news that all of this year's contestants (including the GC, despite the ups and downs she's had in the competition) are going to reunite for a final performance on Sunday evening was music to fan's ear-muff-covered ears.

Can I get a side of sequins with that?

Sadly, however, there's been no officially word on whether Dancing On Ice has been renewed for another season, but I have contacted ITV for comment and will keep you updated on what I hear.

The Dancing on Ice 2019 finalists skating for the crown are Saara Alto (who's paired with Hamish Gaman), Wes Nelson (paired with Vanessa Bauer), and James Jordan (paired with Alexandra Schauman). After what has been an absolutely explosive season both on and off the ice, I can't wait to see who will walk (or skate?) away victorious.

The undeniable star of the show was the GC. Do you stay up late into the night watching her Instagram stories? No... me neither... (just kidding I am obsessed). Collins faced an enormous amount of scrutiny when it came to her performance on the show, as well as body shaming and gossip throughout her time there. Skating judge Jason Gardiner certainly had a few negative things to say about Collins. As the Evening Standard reports, even after the Essex star was off the show, Gardiner continued their feud, referring to Collins as a "fridge." But, true to form, the GC bit back, writing on Instagram:

I’m really tired of being BULLIED by this man .... I wish you would stop ..... it’s very very upsetting and hurtful let it go Jason stop bullying me ENOUGH is ENOUGH I won’t be bullied any more making me feel uncomfortable to come back to the final on Sunday ! I was looking forward to Sunday but won’t be anywhere near someone who’s BULLYING me .... this is NOT ACCEPTABLE on any level comparing any human to an electrical appliance is not acceptable #STANDUPTOBULLIES

According to Digital Spy, Gardiner was quick to deny that the comment was regarding her size, saying:

"I was not calling Gemma a refrigerator. It was meant as a light-hearted joke when Phillip [Schofield] said the 'GC' which sounds like a white goods brand."

Anyway, although fans were sad to see Collins go, the three finalists have really skated up to the plate this season, with all manner of amazing tricks and skills up their collective sleeves. And all while under the watchful eyes of UK skating legends Torvill and Dean. It will be sad to see all the excitement end, but considering how great this season was, we can expect an epic finale.

Watch the final of Dancing On Ice this Sunday March 10 at 6p.m.

More like this
The Love Island 2022 Reunion Drama, Explained
By Sophie McEvoy
Ekin-Su & Davide’s Next Move Is Confirmed & Involves *A Lot* Of Travel
By El Hunt
Laura Tott From 'First Dates' Married Her Long-Term Mystery Boyfriend
By Darshita Goyal
This 'Bridgerton' Polin x 'Love Island' Crossover Is Everything
By Darshita Goyal
Get The Very Best Of Bustle/UK