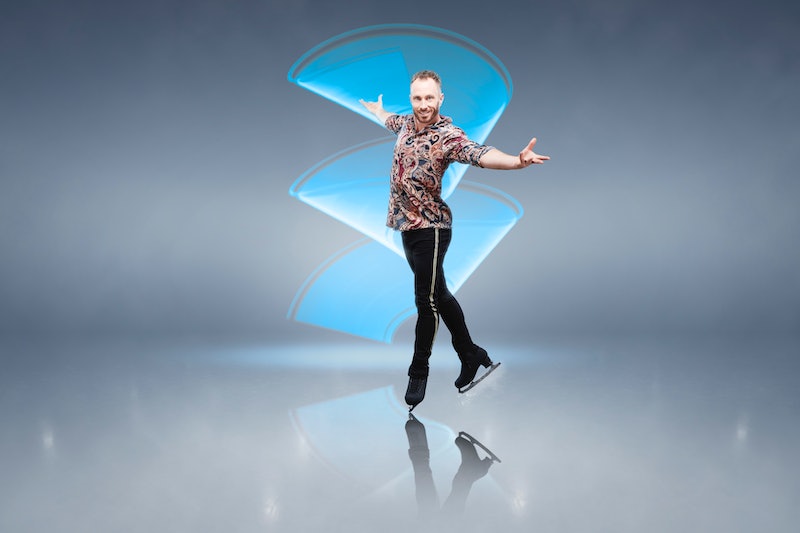 With the conclusion of Dancing on Ice right around the corner, there is no room for error for the remaining contestants. This weekend the all-star lineup will take to the ice once again and compete for a place in the grand finale. However, one celebrity skater's future on the show has been put in jeopardy due to a serious injury. But will James Jordan quit Dancing on Ice?

According to the Express, Jordan is suffering with a painful hernia, which could force the former Strictly Come Dancing professional to pull out of the competition. It would be a great shame if this turns out to be the case, because, as previously reported by Bustle, Jordan is currently in the running to take home the gold, as Bustle reported this week.

The painful injury occurred during rehearsals with partner Alexandra Schauman, and Jordan has revealed that he's finding it increasingly difficult to deal with injuries as he gets older. As reported by the Express, the Strictly star went into detail about the injury during an interview with the Daily Star, telling them: "I’ve ripped open my hernia. I’ve also got lower back pain because of it. I'm falling to bits. Managing injuries is getting harder as you get older."

This isn't the first time the Dancing on Ice favourite has been involved in a serious injury, because, as reported by the Daily Star, Jordan previously suffered a nasty fall on the ice, and, to make matters worse, the semi-finalist dropped partner Schauman, which caused her to land right on top of her head. The incident, which was caught on camera during rehearsals, took place as the skating couple were practising a risky lift. Paramedics were quickly called to the scene, and thankfully the duo were fit enough to continue with the competition. Although nothing has been confirmed, it seems the former Strictly star is expected to glide across the ice again this weekend, because, according to the Express, an ITV spokesperson confirmed earlier that Jordan "is training on the ice today."

This year's Dancing On Ice appears to have been one of the most popular seasons yet, with fantastic flips and tricks, plenty of laughs, and, of course, a fair bit of drama. The favourite to win the eleventh series is Love Island's Wes Nelson. The reality TV star sits slightly ahead of Jordan, who is predicted to finish in second place, while X Factor 2016 runner-up Saara Aalto and former Westlife singer Brian McFadden are the joint favourites to finish in either third or fourth place. The "You Raise Me Up" singer's presence in the semi-final is somewhat of a surprise, as McFadden was the bookies favourite to be voted off the ITV show during last weeks skate-off. Instead, it was the turn of former Pussycat Dolls singer, Melody Thornton, to say her goodbyes and miss out on a spot in this weekend's all-important semi-final.

The Dancing On Ice semi-final airs this Sunday at 6 p.m. on ITV1.