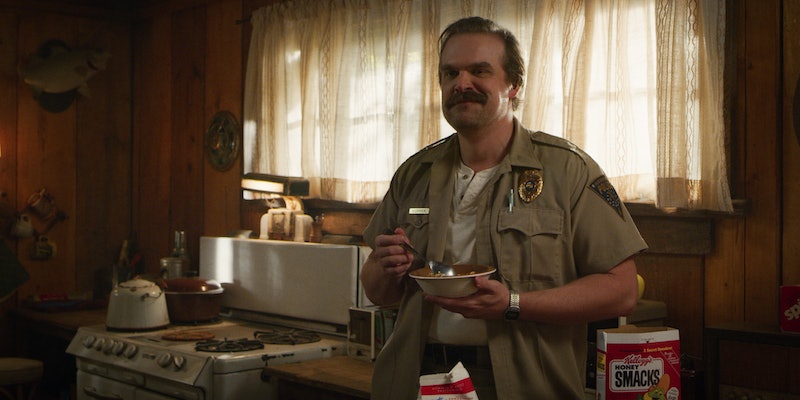 Spoilers ahead for Stranger Things 3. If you're still having trouble wrapping your head around a potentially Hopper-less Stranger Things, fret not. There's still hope David Harbour will be in Stranger Things 4 in one way or another — yes, even if his character is really, truly dead.

The beloved police chief has gone through a lot since Season 1, becoming a father figure to El while trying to move on from the trauma of his daughter's death — not to mention helping to take down his fair share of interdimensional monsters. But Stranger Things 3 seemingly brought an end to his journey after he chose to sacrifice himself so that Joyce could properly close the door to the Upside Down and save Hawkins for, ideally, the final time.

However, some Stranger Things theories suggest that Hopper is still alive, whether he's the "American" the Russians mentioned in the end credits scene or he jumped into the Upside Down at the last minute and is now stuck there, waiting for Eleven and the gang to save him. And both Harbour and the rest of his castmates are holding out hope that fans are right.

"I mean, we should always hold onto hope. We should never let go of hope – but Barb is really dead," Harbour joked to Entertainment Tonight when asked if he thinks Hopper is still out there. Noah Schnapp, who plays Will Byers, echoed the sentiment. "I hope Hopper isn't fully gone, but I feel like he'll be coming back. I don't think he's gone forever," the actor told ET.

However, Harbour also said it "seems pretty crazy" that Hopper could return given the circumstances surrounding his death, and was less certain about his future on the show while speaking to People. "In terms of my involvement, I love the show, but we'll have to see what happens moving forward. I don't really know," he said. "[Stranger Things creators the Duffer brothers], I do believe, have a plan, but we'll have to see what they have in mind."

Of course, even if Hopper isn't alive, there's always a possibility that he could make a cameo in flashbacks or as an image in someone's mind, much like how Dr. Brenner returned in Stranger Things 2 despite having been last seen cornered by a Demogorgon.

And while Harbour's future on Stranger Things is uncertain, he won't be disappearing from the limelight any time soon. He's set to star in the upcoming films Dhaka and Marvel's Black Widow, and is returning to Netflix in the comedy short Frankenstein's Monster's Monster, Frankenstein on July 16. Plus, the fact that he hasn't taken on any new leading TV roles is telling: perhaps he's leaving room in his filming schedule for Stranger Things 4. Whether or not the Duffers are planing to have him back, we don't yet know, but Harbour has made it explicitly clear that he's ready to return whenever the show will have him, and fans have made equally clear that's the story they want.

More like this
'The Queen’s Gambit' Season 2 Tweet Wasn’t From Anya Taylor-Joy
By Mary Kate McGrath, Jack Irvin and Grace Wehniainen
Netflix Shut Down 'Bridgerton' S3 Rumours About A “Very Dark” Storyline
By Bustle
Everything To Know About 'Only Murders In The Building' Season 3
By Gretchen Smail and Kadin Burnett
Ashton Kutcher Wants Danny Masterson “To Be Found Innocent” In Rape Retrial
By Jake Viswanath
Get Even More From Bustle — Sign Up For The Newsletter
From hair trends to relationship advice, our daily newsletter has everything you need to sound like a person who’s on TikTok, even if you aren’t.