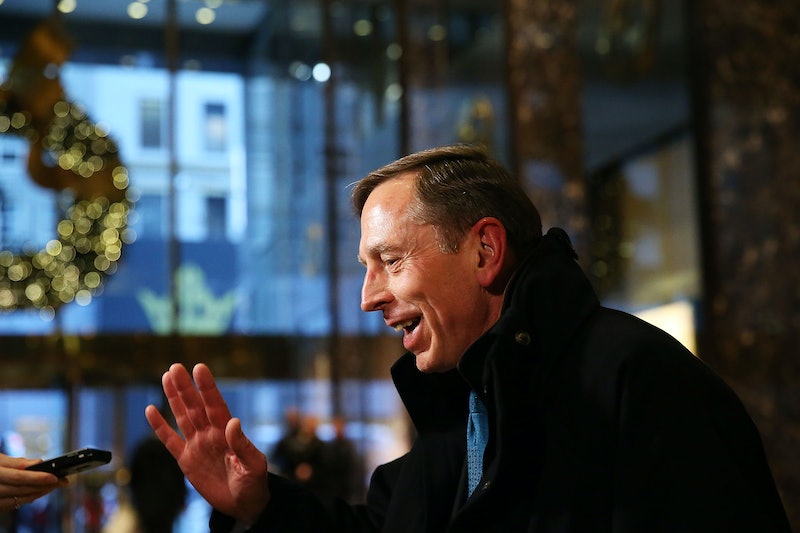 Michael Flynn didn't last long as national security adviser. The first of President Donald Trump's appointments to resign came on the heels of a Washington Post article that questioned his ties to Russia and the conversations that he had with the Russian ambassador to the U.S. before Trump's Inauguration. Now it looks like a familiar face could take over the newly vacant position: David Petraeus. But first Trump has to make his final decision. Are Petraeus and Trump friends? They definitely know each other, but there is nothing pointing to friendship — just meetings after Trump won the election.

Trump did speak well of Petraeus throughout his campaign, though, and that Trump considered him for secretary of state back in January does hint at a warm working relationship. But it does seem to be just that, a business relationship. For one thing, Trump opted not to pick Petraeus and instead tapped the Mobil executive Rex Tillerson.

Petraeus handled being overlooked in a dignified manner, though. "It was an honor to be considered for Secretary of State," Petraeus told Politico at the time. "I am grateful to the President-elect for his consideration and for the opportunity to engage with him. I am encouraged by the time and deliberation he devoted to the process." That then kept the door open for this consideration.

The choice of Petraeus would be somewhat controversial. He, of course, was forced out of his last job running the CIA after a Justice Department investigation found that he had passed along classified information and then lied about it to the FBI. He's still on probation from the case and had to pay a large fine. Given Trump's criticism of Hillary Clinton's handling of classified information, that would be even more hypocritical.

One upside is that he doesn't have any Russia baggage. If anything he's been rather critical of Russian President Vladimir Putin's geopolitical ploys. In 2015 he accused Putin of trying to build up the Russian Empire again. "Russia's recent military escalation in Syria is a further reminder that when the U.S. does not take the initiative, others will fill the vacuum, often in ways that are harmful to our interest," Petraeus told the Senate Armed Services Committee.

He's also spoken well of Clinton and halfway criticized the Trump Administration's travel ban. Those bode well for the nation, but won't necessarily win him any points with Trump. Petraeus told the House Armed Services Committee that the quicker extreme vetting could be put in place and the ban ended, the better, while also adding, "We must also remember that Islamic extremists want to portray this fight as a clash of civilizations ... we must not let them do that."

Now it's time to wait and see where Trump looks for the next national security adviser. He's not always predictable.