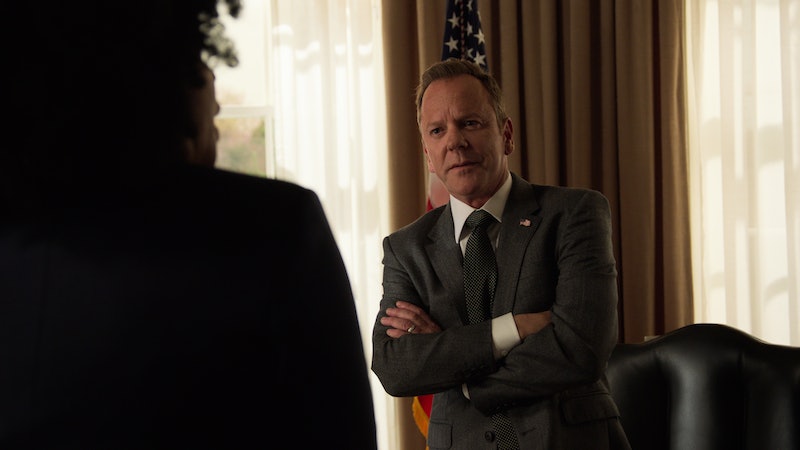 In May 2018, when ABC initially canceled Designated Survivor, Netflix swooped in to save the day. The streaming site picked the show up for a third season, which premieres June 7. Did Netflix just want to give the show one more chance though, or can fans expect more? Will Designated Survivor return for Season 4?

Earlier: If enough people tune in for Season 3, there's a high chance Netflix will want to continue the story. The network obviously believed in the show enough to resurrect it from cancellation, and had faith that the viewership would be there. In fact, part of the reason Netflix wanted to pick up the series was because of the fans outside of the United States. According to The Hollywood Reporter, when the first two seasons started streaming on Netflix, the site saw an increase in global viewership.

"Timely and gripping, Designated Survivor has quickened the pulses of our Netflix members outside the U.S. and Canada in its first two seasons," Bela Bajaria, Netflix VP Content said in a statement, per THR. "The international audience for the show drove our interest to bring the show to the world as a Netflix original for its third season and we are excited to bring the first two seasons to our U.S. and Canadian members as well."

Now there's a new showrunner (the series' fifth) in charge, and Neal Baer is really excited about the direction Netflix let him go in, according to an interview with TV Line. "When I pitched these characters to ABC, they kind of looked at me like, 'Whoa.' And when I pitched to Netflix, there were like, 'Oh, tell me more,'" Baer said. "You can go much further, deeper, darker, edgier, and be more realistic, and that was great for us."

The constant changes in showrunners is actually part of the reason ABC wanted to cancel Designated Survivor. According to CinemaBlend, ABC president Channing Dungey felt that the series didn't have enough of a direction. "Creatively, we've had a lot of behind-the-scenes churn on the show in terms of the number of showrunners involved. We were less confident with the creative path forward than the other shows we brought back," he said.

But Netflix seemed confident enough in Baer's vision to order 10 episodes. According to Deadline, Season 3 will be about Tom Kirkland campaigning for president. He'll face all the realities of today's political landscape including "smear tactics, debates, campaign finance and 'fake news.'"

Baer summed it up in his TV Line interview, saying, "The arc for Kirkman this season is: Can a man of integrity, valor and dignity swim in a muddy political stream and not get dirty? What are the tradeoffs? Can he maintain his honor?"

TV Line reported that the 10 episodes will get to Election Day, but it's possible that there will be a cliffhanger as far as who wins. That's what a potential Season 4 could be about: the aftermath of the race and what it means if Kirkman does or doesn't win.

Designated Survivor's first two seasons premiered in September on ABC, but Netflix's third season is hitting in June. Netflix tends to spread out their seasons a year apart, so if the show gets renewed, it would likely be back in the summer of 2020. By then the fictional U.S. in Designated Survivor could have a new president, and our real country will be gearing up for a big election too. That real campaign cycle will likely be rife with story possibilities for Designated Survivor Season 4 and beyond.