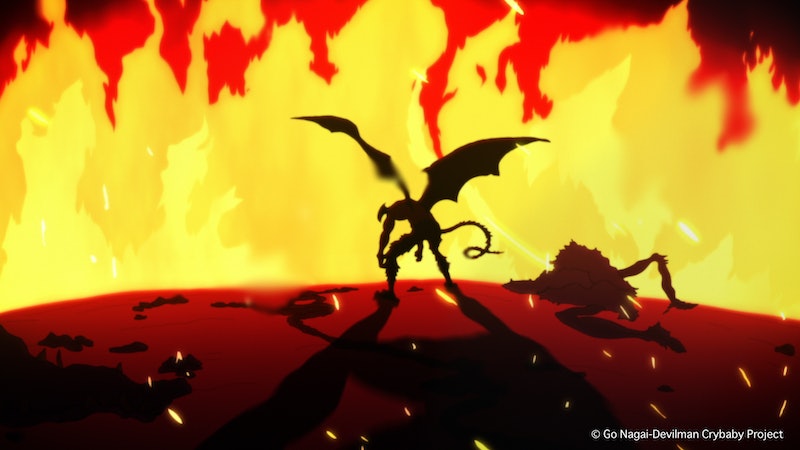 While Netflix has been steadily accruing a massive collection of original content, the streaming platform didn't get into the business of producing original anime series until 2017. Devilman Crybaby is only the second original anime the platform has produced, following 2017's Castlevania, but will likely find an audience in those that enjoy surreal, violent animated series. The 10-episode series marks Netflix's largest anime project yet, and while Season 2 of Devilman Crybaby has yet to be announced, the show could prove to be a flagship anime title for the network. However, Netflix subscribers who fall in love with the twisted story of Devilman Crybaby won't have to wait for a second season if they want more Devilman — the franchise has been going on for nearly half a century.

Devilman Crybaby is only the newest iteration of the Devilman franchise, which first existed as a Manga — a Japanese comic book — in 1972. The series premiered as an anime that same year, ending its original television run only a year later. Since the 1970s, the series has been rebooted and reimagined various times, including the three-part crossover miniseries Cyborg 009 VS Devilman, which is currently the only other Devilman series streaming on Netflix. While a second season of Devilman Crybaby has yet to be announced, Netflix's increased focus on anime hints that more Devilman could be on the way in one form or another.

Bloomberg reported that Netflix was committing $8 billion to original programming in 2018, with a great deal of that money going toward anime series. While some of that is going toward producing television and movies based in America, Netflix has been increasing its international appeal in recent years by including more foreign-language programming. So far, much of Netflix's foreign language programming —ranging from aptly-titled German thriller Dark or the Brazilian-Portuguese dystopian sci-fi show 3% — has been live-action. However, Netflix Chief Content Officer Ted Sarandos has expressed that the platform is interested in building it's anime library, saying that "[Netflix] has 30 different projects based on the Japanese style of animation in different stages of development."

Netflix seems to be putting its money where its mouth is — which could be great news for those hoping to see Devilman Crybaby continue past Season 1. While Castlevania was technically Netflix's first original anime series, Devilman Crybaby marks the first time that Netflix is producing an anime series intended for a Japanese audience instead of the American anime fanbase. For some purists, anime is only really anime if it's produced in Japan and then later subtitled or re-dubbed for American audiences, so the production of Devilman Crybaby seems to show that Netflix plans to continue catering to hardcore anime fans in 2018.

As Netflix's first Japan-produced anime, there is a lot riding on the shoulders of Devilman Crybaby. The show's success could announce Netflix as a major player in the world of anime streaming. While Netflix does have a large collection of anime, it not only competes with Hulu's anime streaming libraries, but also specialty anime streaming services like Crunchyroll and Funimation. However, despite the competition, the platform seems to be using a tried-and-true strategy to introduce themselves to the world of original anime production. Netflix's decision to reboot a popular series for their first original anime is similar to their choice of adapting British series House of Cards as their first original program. Bringing back a well-regarded series with a built-in audience could pay off well for Devilman Crybaby, just as it did for House of Cards. While there's no guarantee that Devilman Crybaby will return for a Season 2, the series will likely go down in history as Netflix's first step toward trying to dominate global anime streaming — and time will tell how the streaming site proceeds from here.

More like this
'Ghost In The Shell: SAC_2045' Was Only Supposed To Last Two Seasons
By Kadin Burnett
10 Eurovision Moments That Celebrate The Weird & Wonderful Camp Extravaganza
By Sam Ramsden
Everything To Know About The Possibility Of 'The Essex Serpent' Season 2
By Rachel Mantock
ITV’s 'Grace' Will Likely Return for A Third Season — & Many More After That
By El Hunt
Get Even More From Bustle — Sign Up For The Newsletter