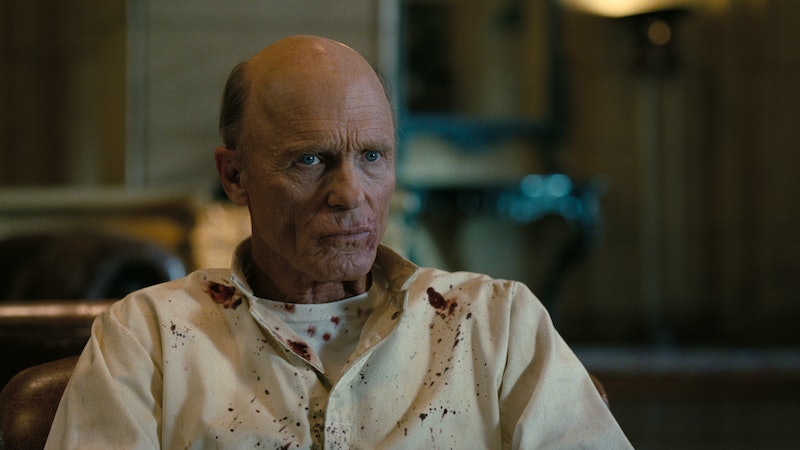 Spoilers ahead for the Westworld Season 3 finale. You can always count on Westworld to save one twist until the end. Season 1's post-credits scene promised carnage to come as Armistice continued her assault on Delos; Season 2 teased an apocalyptic future at the end of Dolores' rebellion, as a host version of William underwent fidelity tests in the far future. And now, the Westworld Season 3 finale's post-credits scene has seen good on that promise, showing viewers the moment William was turned into a host… and the real William died for good.

After the credits rolled, the action picked up again with William, still hot on his mission to save the world after deciding thanks to his AR therapy that he was "the good guy." Storming into a Delos facility, William demanded to see where they were printing hosts. After terrorizing a woman at reception and shooting a security guard in the head, William made his way to the lower level, where he found Charlotte (or the Dolores inside Charlotte) waiting for him. Still sporting a burned arm from the explosion that killed her family, Charlotte wasn't surprised to see William; in fact, she was waiting for him. And she wasn't the only one.

William was shocked to find himself face-to-face with a host version of himself, dressed in his Man In Black finest. After a brief fight, the host William slit the throat of the real William. "Welcome to the end," Charlotte gloated as William bled out. Is this the version of William that was seen in the Season 2 post-credits scene? It seems likely, though that post-apocalyptic future must still be a long way off.

However, if Season 3's second post-credits scene is any indication, maybe that future isn't as far off as it seems. In the short sequence, Bernard woke up in the same hotel room where he was last seen entering the Sublime. Now covered in dust, it appeared as though years and years had passed — similar to the appearance of the ruined Forge that host-William visited at the end of Season 2.

Could a big time jump be in store for the recently announced Westworld Season 4? Will the new season finally catch up with the future glimpsed at the end of Season 2? If so, how did the world reach such a ruined state? That remains to be seen… though it probably has something to do with the rows and rows of hosts being printed behind Charlotte as she smirked over William's corpse.