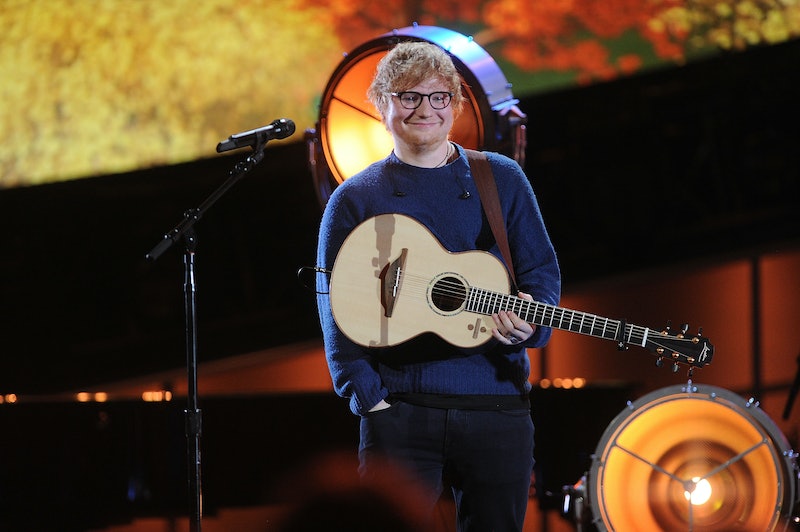 It's your big day. The one you've been imagining for years. You look the best you've ever looked, you're marrying the love of your life, all your friends and family are there, and they're thrilled for you. Then, you hear the sound of a guitar strum. "We are still kids, but we're so. in. love..." Ed Sheeran sings, staring at you in your wedding get up. Sounds too good to be true, right? I know you've been asking yourself ever since your engagment, "Will Ed Sheeran come to my wedding?" Well, I've got the answer.

That might sound like a completely ludicruous question, but it wouldn't be the first time a major celeb just suddenly rocked up at some random's wedding. Actually, there are plenty of examples of celeb wedding crashers. Remember that time Bey and Jay joined a tiny little seaside wedding in 2014? According to Elle, the couple were absentmindedly enjoying a birthday weekend in Portofino when they stumbled across a wedding in a local church. The bride told E!, "it was a big surprise," and revealed that Beyoncé called her dress "so gorgeous." I wouldn't even be able to deal.

But is Sheeran prone to a little wedding crashing?

You bet. As the Telegraph reported on March 26, 2015, Sheeran reduced a bride to tears when he made an out-of-the-blue appearance at a wedding in Australia. But these were two very deserving people. As the Huffington Post reported, the bride had lost her mother a few years before, and, when she couldn't fund the wedding of her dreams, local radio station KIIS 1065 stepped in and gave the pair a day they'd never forget, which included a live performance from Sheeran.

The "Shape Of You" singer also showed up to play a few tunes at Snow Patrol member Johnny McDaid's sister's wedding. As Time magazine reported on Aug. 31, 2016, the musicians performed songs from their respective repetoires, including a joint performance of Snow Patrol classic "Chasing Cars." They then reportedly went full wedding singer with a rendition of Stevie Wonder's "Superstition." Just imagine that.

Often, though, the singer revealed those performances are sprung on him. "I don't get asked to play the wedding, I just get invited (as a guest) and then it gets to a certain point in the night where I'm a bit hammered (drunk) and then... I'll end up doing it, so that's happened a bunch of times...!," he told Good Morning America. "It's like, 'It's so weird there's a guitar here...'"

So, how can you lure the pop star in yourself? First off, I'd recommend throwing a Games of Thrones-themed wedding. It's no secret that Sheeran's a huge fan of the HBO show. He even got to make a cameo in season seven. So, if Sheeran hears that there's a GoT wedding in town, you may just get him to make an appearance. Oh, and if you get Nando's to do the catering, it's pretty much a dead cert. Sheeran loves their peri-peri pengness so much that he even wrote a song about it with Example in 2011.

And if none of that works, then you can always get the next best thing: an Ed Sheeran impersonator. This guy not only seriously looks like him, but, according to the impersonator's website, he can also beat-box and rap just like the man himself. If you fancy having Sheeran — sort of — sing at your wedding then you can hire the "Ed Sheeran Experience" with prices starting at £900.