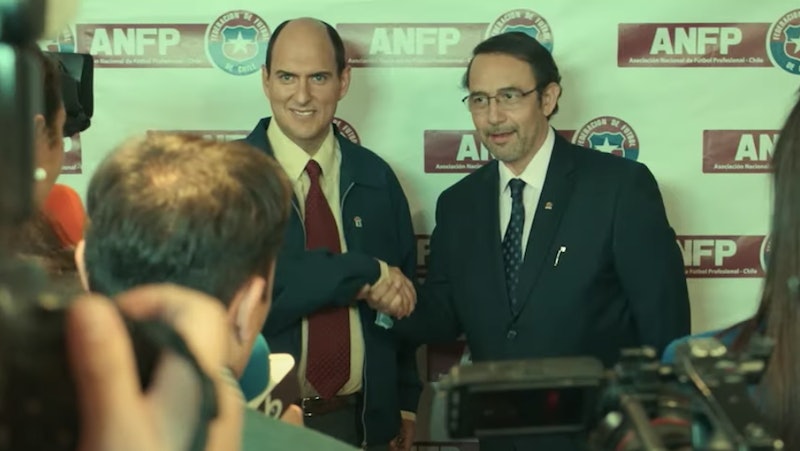 Amazon Prime's first Chilean series — out Friday, June 5 — takes a humorous approach to the 2015 FIFA corruption scandal. The series was created by Argentine film director Armando Bo, who co-wrote the Oscar-winning Birdman. The series focuses instead on a seemingly small fish in the FIFA pond: Sergio Jadue (Andrés Parra), the president of a Chilean soccer club who eventually becomes an FBI informant, working with agent Rosario (Karla Souza from How to Get Away with Murder) and a key player in bringing down then-organization president Sepp Blatter. So far, however, there's no word on whether El Presidente may return for Season 2.

Right now, the showrunner has a lot on his plate: In May 2020, he launched his own production company, About Entertainment. Although Bo is working on some content for the company, no other details have been finalized or announced. "I am definitely interested in the American market but also, right now premium content from Latin America is something everybody is looking for," Bo told Deadline. "El President[e] was a real opportunity to try something that is international in scope but related to America, and it feels like a great time for me to develop projects for different formats."

In an interview with Variety, Bo praised the El Presidente writers room. "One challenge as director and showrunner [is] to maintain a flow and continuity of tone between episodes," he said. "We had so much really good material to work with."

And while El Presidente isn't being billed as a limited series, it certainly feels like one. In real life, Jadue pled guilty to racketeering conspiracy and wire fraud conspiracy, per Reuters, and in May 2016, was banned from FIFA for life. The ensuing TV adaptation contains eight hour-long episodes, which Bo compared to four movies in an interview with the Argentine paper Clarín. This certainly feels like enough time to tell the story of "FIFA Gate."

So if Season 1 does indeed follow the Chilean soccer president's entire ascent and fall from grace, then there may be no need for an El Presidente Season 2.

More like this
A 'Terminal List' Sequel & Spinoff Are Reportedly In The Works
By Kadin Burnett and Grace Wehniainen
Everything To Know About The 'Daisy Jones & The Six' TV Series
By Maxine Harrison and Brad Witter
Netflix Shut Down 'Bridgerton' S3 Rumours About A “Very Dark” Storyline
By Bustle
Here’s Why Danny Masterson’s Hyde Isn’t In 'That '90s Show'
By Brad Witter
Get Even More From Bustle — Sign Up For The Newsletter
From hair trends to relationship advice, our daily newsletter has everything you need to sound like a person who’s on TikTok, even if you aren’t.