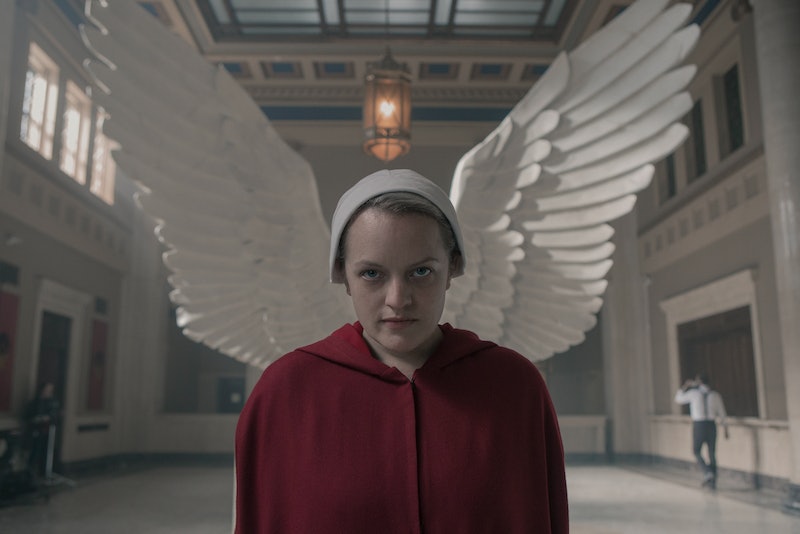 Spoilers ahead for The Handmaid's Tale Season 3. While The Handmaid's Tale has been renewed for Season 4, the events of the Season 3 finale call into question exactly what the future of the series will look like. There's a strong possibility that June is dead, and The Handmaid's Tale could continue without Elisabeth Moss. The official announcement about Season 4 did not specify casting, but when the show returns, there may be a new protagonist carrying on June's legacy.

At the end of the finale, June's ever-peering eyes shutter closed after a battle that left her injured and barely holding on to life. If she does survive, this wouldn't be the first time that June has conquered insurmountable odds. It's almost annoying how many times June has avoided death, or trouble at all, and ended up back at square one. We may be worried for no reason. Season 4, like all the seasons before, could be all about June's recovery and the aftermath of her successful child smuggling venture. Don't forget, June has unfinished business in Gilead. Someone needs to find Hannah and bring her to Luke. For that reason alone, she may still be alive.

Prior to the events of the Season 3 finale, fan theories wondered if Season 4 could involve June marrying Commander Lawrence, or even Serena Joy becoming a handmaid. Those are out of the question now, right? Serena has been arrested (and is canonically infertile) and if June manages to survive the events of Season 3 she is in WAY too much trouble now to show her face in Gilead as a wife. Smuggling over fifty children out of Gilead is her biggest crime yet and her involvement won't be easy to hide if she lives.

On the other hand, even if June is dead, Moss could still appear on the series in some way. She could remain behind the scenes instead. The Emmy and Golden Globe winner is already an executive producer on the series. Maybe, in Season 4, she'll direct an episode or two. This project is clearly personal to Moss, and she will likely remain involved.

As June, she could still provide the voiceover narration from the grave. June could appear in flashbacks. As we saw in the finale, any scenes of June and Luke playing with Hannah are effective emotional punches that remind the audience of how much these characters lost.

Plus, there is still a lot of untapped personal history from her time in Gilead. We never met the Commander who June was first assigned to as a Handmaid, or what happened at that household. Even if June maintained the status quo in order to survive during that time, she might have made a connection with someone who becomes important later. Everyone who meets June is impacted in some way on The Handmaid's Tale whether or not that is her intention.

All in all, it's hard to imagine the Hulu series without Moss' signature sass, so hopefully they will find a way to incorporate the character even if her eyes closed for the last time in the Season 3 finale.