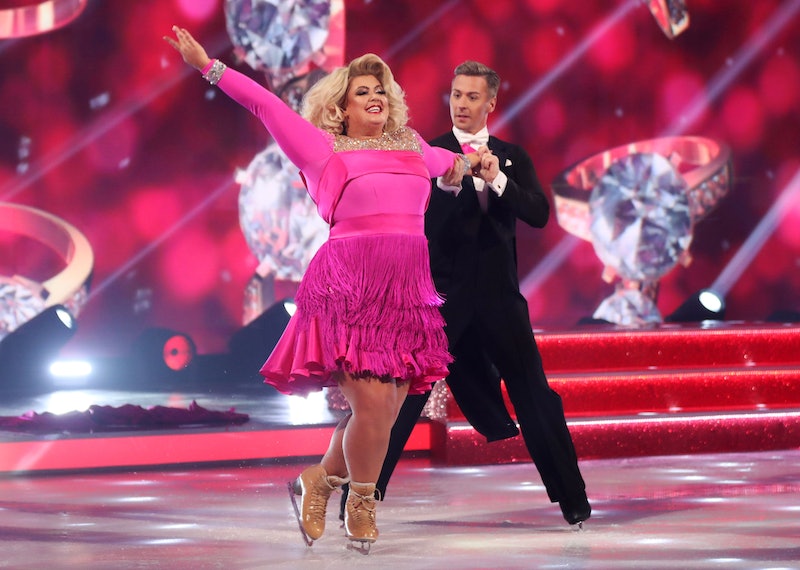 Although Gemma Collins completely nailed her routine on Sunday night (Feb. 3) after her fall last week, it hasn't stopped some Dancing on Ice viewers from expressing outrage that the TOWIE star has survived another elimination. Although I can see where the viewers are coming from, with these sorts of shows, it's all about the celebrities learning a skill that is completely foreign to them, and improving week by week. With that in mind, will Gemma Collins win Dancing on Ice, or will the public's support fade as we get closer and closer to the final?

After Sunday night's DoI, many viewers were upset that Collins had made it through to another week, the Mirror reports, and some even threatened to boycott the show if it continued. However, these viewers may not have to worry, as, sadly, the odds aren't in Collins' favour to win DoI.

To get a better understanding of where Collins stands in terms of popularity, I contacted a representative for Betfair, who told me that "while Gemma is adding plenty of drama to the show, she's definitely at the bottom end of the leaderboard now." Her odds are currently at 33/1 to win, which puts her just above Ryan Sidebottom, who is at the bottom of the board with odds of 100/1.

However, when it comes to next week's eliminations, it seems like both celebs are the top favourites to be voted off, with Collins' odds at 6/4, and Sidebottom just above at 11/10.

Yeah, those prospects don't sound too great for the GC. But they're not set in stone, and viewers have absolutely no idea what Collins may pull out of the bag for her next performance. Plus, the reason why she's still in is all thanks to the public's support and their votes each week.

As for her score this week, Collins will be the first to admit that her confidence took a knock this weekend, as she was visibly upset Sunday night listening to the judges critiques, Digital Spy reports. "My nerves have gone since the fall," she told presenters Phillip Schofield and Holly Willoughby. "I'm really upset because obviously last week... it's the fall... my nerves have gone."

Collins' boyfriend James Argent reiterated how she felt about the fall, telling the Loose Women panel last Friday (Feb. 1) that Collins was "crying her eyes out" backstage, and that she was "so embarrassed because, as much as she loves being the GC, she does have a heart."

He also told the panel that, despite the injuries to her knees, Collins was determined to get back to rehearsing for her next performance. And while Collins ended up missing a day of rehearsal (at Torvill and Dean's request), as Arg explained, "she's so determined to prove people wrong and work that she just wants to go straight back on the ice and practise." Good ol' GC.

Either way, watching Collins improve from week one up until now has been an absolute treat, and she is doing better than I would if I were in her position. I wouldn't be able to let go of the sides, let alone actually skate across the rink.