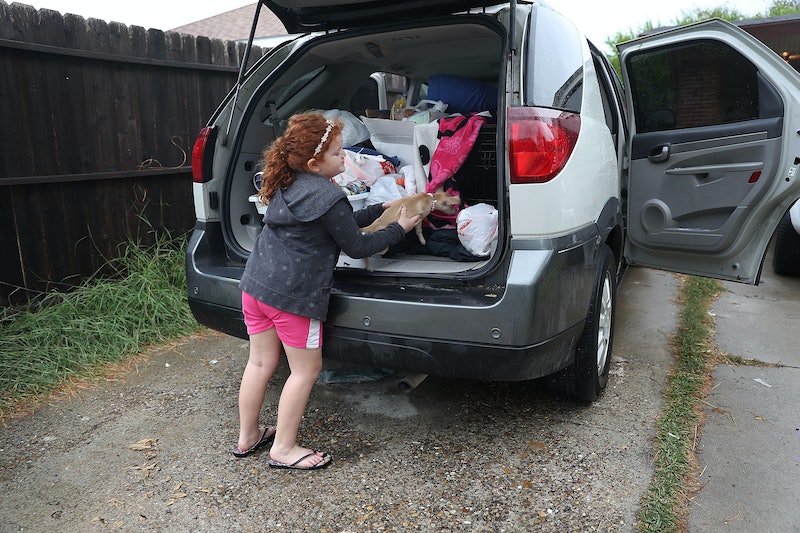 A hurricane brewing in the Gulf of Mexico could create major problems for coastal Texas communities this weekend, with potential for days of rain, flooding, and power outages. Residents across the state are prepping for the storm, but cities in the direct path of the storm are the most in danger right now. Hurricane Harvey could do serious damage to Corpus Christi, a popular Texas beach destination, and the residents may need help when the storm finally passes.

There's no way to be sure where Harvey will hit the hardest, but Corpus Christi is definitely in the path of the storm. Storm warnings are in place from the very tip of the state by the Mexican border all the way over to Louisiana, which has declared a state of emergency in advance of the hurricane. Yet, Corpus should be spared the worst of the damage — according to ABC News, Harvey is expected to hit land about 250 miles northeast of Corpus Christi, closer to the Houston area.

The specific problem that threatens the city during major storms is the Corpus Christi Bay, which has a tendency to flood, according to FEMA storm surge maps. The barrier islands that line the Texas Gulf Coast are helpful in stopping the initial onslaught of the storm, but when the bay starts to flood residents can be in trouble. That being said, the Corpus Christi area is only expected to receive 5 to 7 inches of storm surge this time around.

Some people have been evacuated from Corpus Christi, including 10 critically ill babies who were moved to the Cook Children's Hospital in Fort Worth. Texas A&M Corpus Christi, which directly overlooks the bay, also issued an evacuation order for students who had already moved onto campus for the year, and postponed further move-ins until after the weekend. If you live in the Corpus Christi area, or anywhere along the Gulf of Mexico, be sure to check with the National Weather Service if there's an evacuation order for your community.

The only good thing about living in a community threatened by devastating natural disasters for half of every year is that you get used to it pretty quick. Hurricanes and floods are a fact of life when you live on the Gulf, and most people wouldn't trade their seaside lifestyle even with the risks. The people in coastal Texas cities and towns know how to prep for these storms and take of themselves, so don't be too worried on their behalf.