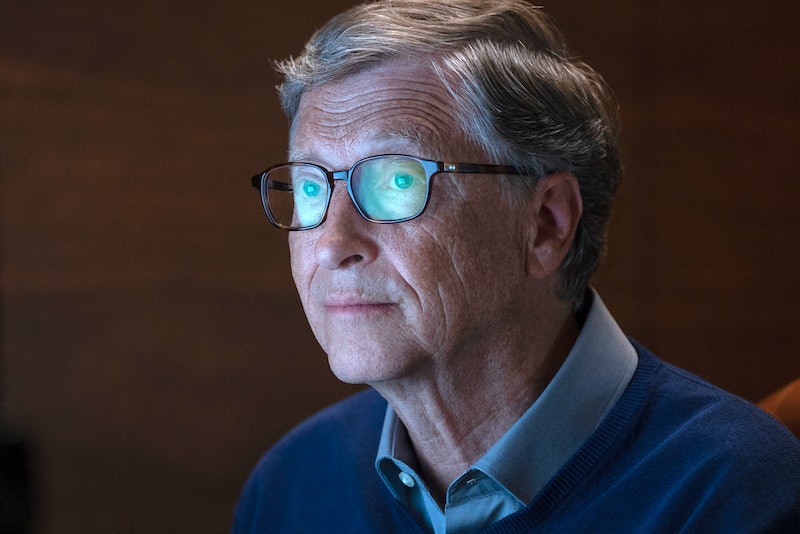 Netflix's Inside Bill's Brain peers into the mind of one of the world's foremost visionaries: Bill Gates. Across three episodes, it follows the Microsoft founder's pursuits to solve some of the world's greatest problems — a lofty goal suitable for its ravenously ambitious subject. Because the show is billed as a limited series, it's unlikely that Inside Bill's Brain will return for Season 2, but as Gates has made clear, his work is far from over.

"I think I have enough time to get rid of most of the infectious diseases," he told Vanity Fair in a recent interview. "Then, of course, you have things like climate change. There's a need to help people adapt in poor countries where they’re going to bear the brunt of this…. There's a lot to do. So I see a busy 20 to 30 years to try and achieve all of this stuff."

The show, which hit Netflix Sept. 20, is directed by Davis Guggenheim, a famed documentary filmmaker known for 2006's An Inconvenient Truth, 2015's He Named Me Malala, and 2010's Waiting For "Superman."

It was while making Waiting for "Superman" that Guggenheim met Gates, who he told the Associated Press was "an open book." So when it came to Inside Bill's Brain, Guggenheim didn't hold back. "In the beginning I said, 'Look, I'm going to ask you every question I have on my mind. I'm not going to be worried about being overly sensitive ... I asked him everything," he told the Associated Press.

The docuseries retraces what Gates has been doing since retiring from day-to-day duties at Microsoft in 2007, focusing largely on his philanthropic efforts to improve the world. According to Vanity Fair, it covers three main issues Gates and his wife Melinda have been working on with their foundation: polio eradication, climate change, and improving sanitation to prevent needless child deaths. And the show doesn't hold back there, either: rather than centering on the Gates' successes, it chronicles their setbacks and struggles. But Gates told Vanity Fair that's precisely why he agreed to the doc: there is power in numbers, and in order to achieve his goals, that's what Gates needs.

"[The issues facing humanity] will only succeed if we get broad sets of people seeing them as a moral imperative," he said.

That's also why Guggenheim wanted to document him. "In this really chaotic, dark time where there’s so much uncertainty, there's so few people who sort of give me clarity. It's very comforting that there's a guy like Bill out there," he told Vanity Fair. "I don't know if he's gonna succeed, but the fact that he's putting so much intelligence and money and influence on some of these really tough issues makes me feel better."

So while Inside Bill's Brain is probably a finite project, there will certainly be more to come from Gates. And at the very least, just knowing he's out there might provide you, too, with a little bit of comfort and clarity.

More like this
There’s *Already* A New Season Of 'The Traitors' To Dive Into
By Sophie McEvoy and Sam Ramsden
'The Bachelor' 2023 Schedule Differs From Last Season In 1 Key Way
By Grace Wehniainen
Everything To Know About 'RHONJ' Season 13
By Brad Witter and Jake Viswanath
This ‘Bachelor’ Spoiler Teases The Dramatic Self-Elimination Of A Fan Favorite
By Grace Wehniainen
Get Even More From Bustle — Sign Up For The Newsletter
From hair trends to relationship advice, our daily newsletter has everything you need to sound like a person who’s on TikTok, even if you aren’t.