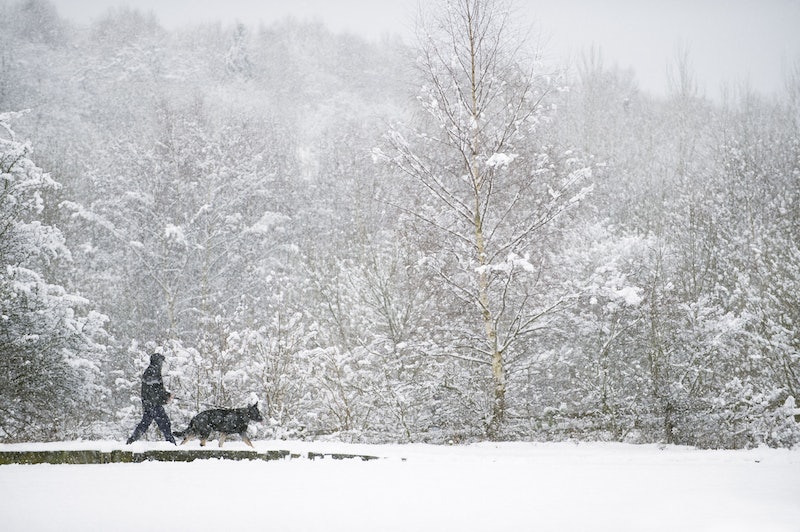 Isn't it funny how nearly every Christmas card features a snowy scene, with fields blanketed with snow or children running around over glitter ice, and yet the chance of actually seeing a white Christmas, especially here in the UK, is slim to none. But, then again, considering how effing freezing it's been of late, maybe 2019 could change things? So, will the UK have snow on Christmas day 2019? Let's look into it.

OK, so, we should start out by working out exactly how we should define "a white Christmas." According to the UK Met Office, the only thing they need to declare snow on Christmas day is "for one snowflake to be observed falling in the 24 hours of 25 December somewhere in the UK." Which doesn't sound very exciting, does it? So you can get images of snowmen and sleigh rides right out of your head.

I contacted the Met Office for their expert opinion on what may happen weather wise come Christmas day 2019. They got back to me and said, "At the moment it looks like Christmas Day itself is likely to be drier and colder than the weather has been of late. This means there could be morning frosts, though as it is currently dry, snow is unlikely." They also added, "Best to keep an eye on the forecast into the weekend and early next week!"

So it looks like the chances of having the Christmas Bing Crosby sung about are, once again, pretty low. Sigh.

White Christmases are very rare in the UK. In fact, the Dickensian image of a land blanketed with snow on Dec. 25 has only actually happened four times in the last 51 years, according to the Met Office.

So why the heck are we so expectant when it comes to snow on Christmas day? Seemingly it's to do with what the Telegraph calls the 'Little Ice Age.' Between 1600 and 1814, Britain experienced super cold winters with temperatures often getting as low as -13 C. Chilly weather was a part of every day life and it was common for the river Thames to freeze right over. It was even recorded in 1536 that King Henry VIII travelled from London to Greenwich on a sleigh across the frozen Thames. Which sounds a lot more fun than the DLR.