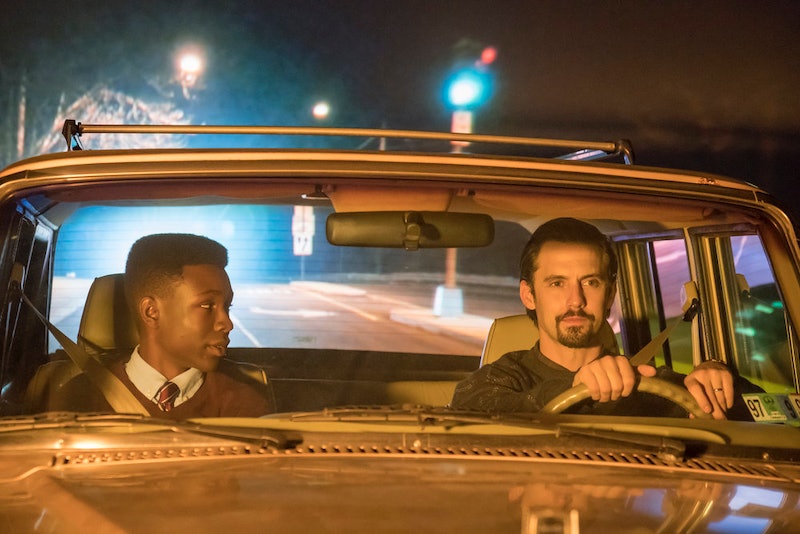 It’s hard, isn’t it, with This Is Us being on fall hiatus? Dedicated viewers (present company included) have to wait until Jan. 2 for more time with the Pearson clan. More tears, more laughter, more soft lighting, more catching feels when Milo Ventimiglia's Jack wears short shorts and that mustache. (Is that just me, that last one?) Most importantly, though, Jan. 2 will bring back the quest for answers of the show’s most widely debated question — how did Jack die? After so many episodes, will Jack’s death be revealed in This Is Us Season 2? Fans are getting much closer to knowing the full story.

Let’s start by breaking down what we know so far. This Is Us has made it apparent that Jack is dead — his remains are in an urn on Kate’s mantel, so this isn’t a Jack-faked-his-death situation. No soap opera here. When the Big Three were kids, Jack realized he had a drinking problem, Rebecca called him out, and he tried to get better. He went to a boxing gym for a while to get his anger out, and everything seemed to work itself out… until the kids were teens. Jack and Rebecca almost got a divorce, but Jack went to AA to work on himself instead. It wasn’t a great time for the Pearsons, because they got a dog that peed everywhere (poor Louie) and Kevin shattered his knee, ruining his chance of planning professional football. Soon after, the house burnt down, and Jack died.

The premiere of Season 2 ended with Rebecca pulling up to the still-smoldering remains of the Pearson house, a bag of Jack’s personal effects on the seat, and scream-crying into the ether. This would lead many to believe that Jack died in the fire, or as a result of the fire. But, his stuff — cash, ring, watch, etc. — wasn’t burned, so that would lead me to believe that Jack didn't die in the fire itself. And, while fans haven’t seen how Jack dies, he does die in relation to the blaze. "[Viewers] don’t know the details," creator Dan Fogelman told Variety. "Did he die in the fire? Did he get out of the fire? But we’re not misdirecting. He didn’t die four years later."

Fogelman also told Deadline that more info on Jack’s death will arrive shortly. “We promised answers in Season 2 and we have eight episodes left, and it’s all coming in short order,” he said. “It will really be a heartbreaking surprise.” But hold up — not everything about Jack’s death will make its way to viewers in Season 2. Deadline reports that “it’s the series’ plan to have other danglers in the older Pearson children’s lives take the front seat to the story surrounding Jack’s death mystery.” So, we’ll get a little bit of answer, and then more questions. Two steps forward, one step back with this show!

But, here’s a little bit more info on what to expect for Season 2 — Randall is heading back to Memphis to spend more time with his birth family. “We have a lot of real estate from Memphis, and we’ll find our way back there,” said Fogelman. Oh, and that whole Kevin-has-a-DUI thing? The family isn’t taking any prisoners when it comes to Kevin’s screw-up. “[The Pearsons] just go at it in an interesting way that I had to call of them into my office because there’s some really serious acting going on,” said Fogelman. “We find Kevin in rehab, and the family has arrived to hash things out in a therapy session. It’s very loaded.” And, things aren't just tough for the younger Pearson actors. When questioned about Jack’s death, Ventimiglia told Entertainment Weekly that he was “pained, personally. Pained by what I was seeing in relation to the Big Three.”

Many fans also feel personally victimized on a weekly basis by This Is Us, and it sounds like it's not slowing down. Fortunately, answers (and more questions) are coming soon in This Is Us Season 2.