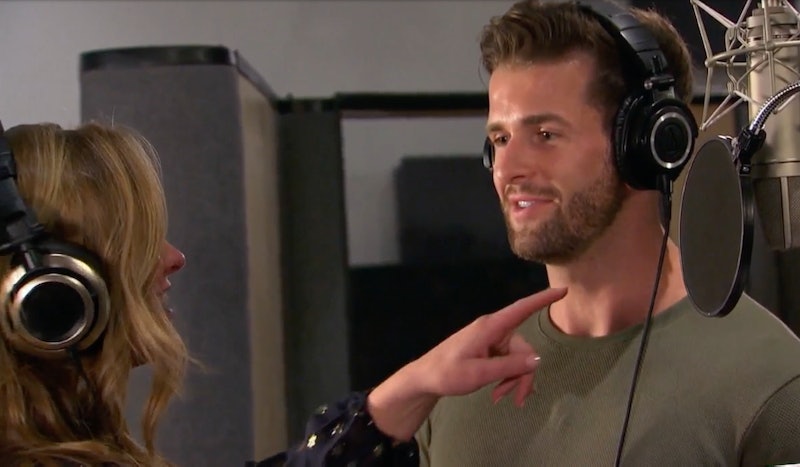 We don't yet know how Hannah's Bachelorette season will end, but if things don't work out with Jed and he ends up on Bachelor in Paradise, it's a pretty safe bet he'll bring one thing along with him: his guitar. As a country boy who hails from Nashville, Tennessee, Jed doesn't go anywhere without those six strings, and as we've seen time and time again on The Bachelorette, he loves to bust it out for a quick serenade. Could we soon be seeing him drinking tequila on the beach while playing his song "Vacation"?

First, let's discuss how Jed's time on The Bachelorette could play out. He's been a clear frontrunner onscreen, but offscreen, he's smack in the middle of a controversy. In June, aspiring musician Haley Stevens claimed to People she and Jed were still in a relationship when he left to film the show, and Jed himself told Hannah he only signed up to further his music career. However, he assured her that after getting to know her, he'd developed genuine feelings and was there for her.

Jed hasn't returned Bustle's request for comment regarding Steven's accusations, but did allude to them in an Instagram post in which he asked fans to be patient until he could share his side of the story. But regardless of what went down, having to face everyone's judgment and criticism about the ordeal would likely be a strain on he and Hannah's relationship if she chose him, which makes it a possibility he's single now even if he won.

So if Jed doesn't end up with Hannah — whether because he doesn't get the final rose or they break up afterward — would he actually want to go on Paradise? Aside from the fact that he'd likely be pretty heartbroken and not super eager to jump into a new relationship, Jed had to take some major time off from his music career to film the show. According to his website, he plans to eventually tour the country, which could mean he doesn't have time to take yet another extended break.

Then again, Paradise's low-stakes environment could be exactly what Jed needs. During his hometown date with Hannah, his parents were pretty clear that he was focused on music right now. But that doesn't mean the guy can't have some fun and maybe make a connection that isn't expected to end in marriage! Yes, Paradise often ends with a few proposals, but the pressure is much lower, and it's not uncommon for people to make the decision that they want to keep seeing each other, but not get engaged just yet.

Of course, Jed and his family have already had to field a lot of hate and backlash from fans after Stevens' accusations, so he may just want to lay low and relax for bit, rather than getting further entangled in Bachelor Nation.

In a recent interview with People, Bachelorette host Chris Harrison said he'll give Jed the opportunity to explain himself during the two-part Bachelorette season finale. Hopefully, his comments will also reveal whether or not he'll be on Paradise.