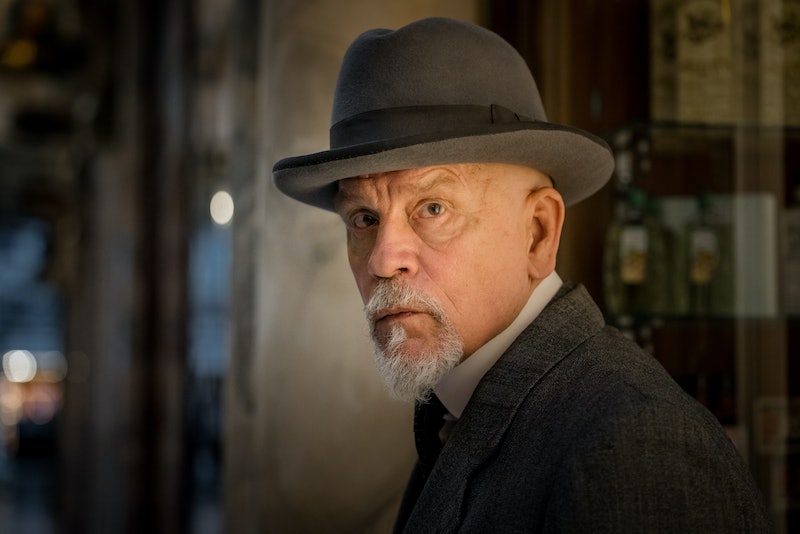 This Christmas, the BBC's big budget period drama has been The ABC Murders and woah nelly, has it been intense. The screen adaptation of Agatha Christie's book of the same name, sees the return of everyone's favourite Belgian detective, Hercule Poirot. And this time round it is an all new Poirot, in the shape of John Malkovich. And he is doing such a ruddy good job that people are wondering, will John Malkovich play Poirot again?

Well at this point, it looks like a no. The ABC Murders is one story told over three parts, and is a miniseries, not scheduled for another season. Bustle reached out to representatives of Malkovich, Agatha Christie Ltd, and production company Mammoth Screen for further comment, but did not receive a response at the point of publication. Playing the famous detective is a fairly high pressured task, considering that the role has been utterly owned by David Suchet, who played Poirot on the ITV series for a staggering 25 years.

Malkovich's Poirot is an older, more solitary character with a great darkness about him. There are no funny quips about how OCD he is, nor witty banter with his pal Hastings. Guys, there isn't actually a Hastings at all. Nor a curly moustache. Yep, this is a whole new version of a classic.

Speaking to the BBC he explained that it was the script itself that attracted him to the role despite all of its pressures.

"Where Hercule Poirot is in his life; he is nearing the end of his life, he is quite forgotten. As it happens he has lived in England for almost two decades and the world has passed him by. As well as the plot and a lot of very good characters, that was the part that interested me the most."

The story is about a serial killer known as ABC who is low key trolling Poirot by sending him lots of letters about future intended kills. So Poirot is trying to track the kills and follow him about. Which is a complete d-bag move because Poirot is not only old and lonely, but also he is flat broke. And we all know how expensive trains are in the UK. Although TBH I can't speak for 1933, but one can assume. This time round it has been adapted for screen by Sarah Phelps, who is gaining a reputation as a bit of a legend in the Agatha Christie world, having already written the scripts for And Then There Were None and Ordeal By Innocence, the BBC reports.

So poor old P is having a right rough time of it, and like after all it was a very tough time to be an immigrant in the UK. In between two world wars, at a time with anyone who seemed different was treated with suspicion. Malkovich points out the obvious parallels with today and how immigrants are often marginalised and vindicated. Speaking with the BBC he gave serious props to Phelps on adapting the story to make it more relatable in 2018.

Although it is not looking likely that Malkovich will be reprising the role, the BBC has commissioned a load more Agatha Christie adaptations that are set to air over the next few years. So who knows, maybe we will be seeing Mr Malkovich again.