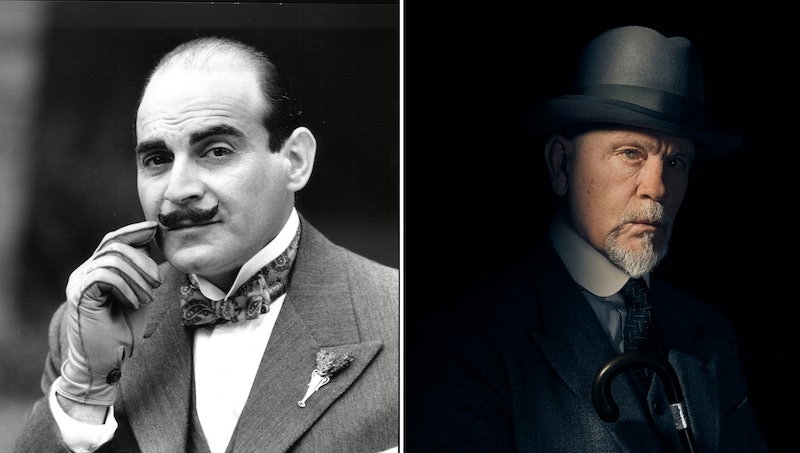 Mystery, murder, chaos, drama — yes it's Christmas time again and you have all of these things waiting for you. As well as that, there is some great telly on. OK just kidding, please don't kill each other over Christmas. Real talk though, Christmas telly is an annual event in the UK and for good flipping reason, to stop any murder from happening. And this year's selection is potentially the best yet. Agatha Christie's immortal Poirot is back this Yule Tide season in a BBC adaptation, but who plays Poirot in The ABC Murders?

Guys it's only flipping John Malkovich. With the power of some pretty lit makeup and a smidge of CGI, Belgium's finest detective is hurtling to our screens quicker than you can say "how the eff does he keep that moustache so perfect?". Yes, that obsessive genius in a bowler hat provides everything that one needs from a Christmas special — period drama, gorgeous costumes, mystery, and of course something you're dying to watch with your parents. Dreamy.

It is of course a classic story from the very legendary Agatha Christie but it has been adapted for the modern day by BAFTA nominated writer Sarah Phelps. The OG story has been televised many times, so it's not exactly easy to find a fresh perspective, yet Phelps has managed just that.

The synopsis of the show on the BBC shows that ghosts from the past are going to creep up on our favourite moustachioed crime fighter. And maybe with this particular little nugget, all might not be as it appears. Cue Eastenders outro music.

"Set in the seething, suspicious early 1930s, The ABC Murders is a brutal story of violence and lies, the long shadow of the past and the slaughter to come. At its centre, one of the most familiar, famous characters in crime fiction. We may all think we know Poirot, but do we really know Hercule?"

Malkovich is an incredible, world class actor, but boy oh boy what boots he has to fill. David Suchet has pretty impressively managed to become the complete and utter embodiment of Poirot — which is a darn impressive feat considering the character was written decades ago.

And nailing that Belgian accent is pretty tricky, even for a seasoned thespian like Malkovich. But well y'all, he actually isn't going to have a Belgian accent. Speaking to The Radio Times about the decision, Malkovich spilled the tea.

"In our version, Poirot has lived in England for 20 years and has made a very long and laborious effort not to seem too much like a foreigner and to speak English like and Englishman. Poirot and Christie fans may just hate all this, I have no idea.”

And I am sorry but there is not even a hint of a curly moustache in those photos. But who is going to be playing his companion and BFF, Hastings? One second where is Hastings?! Well weirdly they haven't announced who is playing him, nor if he will feature at all so I guess that means this time round there will be no Hastings.

Look don't cry, to make up for it, they've only gone and cast Rupert flipping Grint. Ron Weasley, I mean Grint, will be playing inspector Crome and proving there is a lot more in his range than a constantly wide eyed adolescent.

OK I am hooked already. Even if it is only to complain about the lack of Belgian accent and moustache.

Watch The ABC Murders on BBC One, Boxing Day at 9 p.m.